First Of Two Tugs To Sembawang Towing— More To Be Ordered

In order to provide better tug services and to diversify its activities, Sembawang Towing has embarked on a program to modernize its fleet. The company has recently taken delivery of a highly versatile tug, Sea Cheetah, shown above. The tug, built at Singapore Slipway, is powered by two 1,350- bhp Hedemora V12A diesel engines. The vessel's compact size, high maneuverability, and shallow draft enables it to handle vessels up to VLCC size in restricted waters.

The tug was built to owners requirements and ABS Classification for unrestricted service.

The completion of this contract represents an example of the successful cooperation between three local companies: Sembawang Towing Company, the owners, who originally considered placing the orders abroad but then decided that they should be built in a Singapore shipyard to support the local marine industry; Singapore Slipway, who built the tug; and thirdly Hedemora Diesel S.E. Asia, who have scored a success in providing the engines which were partly manufactured and fully assembled in Singapore. Another local company, Kenton Marine (Pte) Ltd., acting as owners consultant, also played an important role in bringing the project to a successful completion.

Sembawang Towing took delivery of the second vessel in the series, Sea Leopard, which will be Lloyd's Registered Class. The company intends to place further orders for this similar class of vessel in the future. 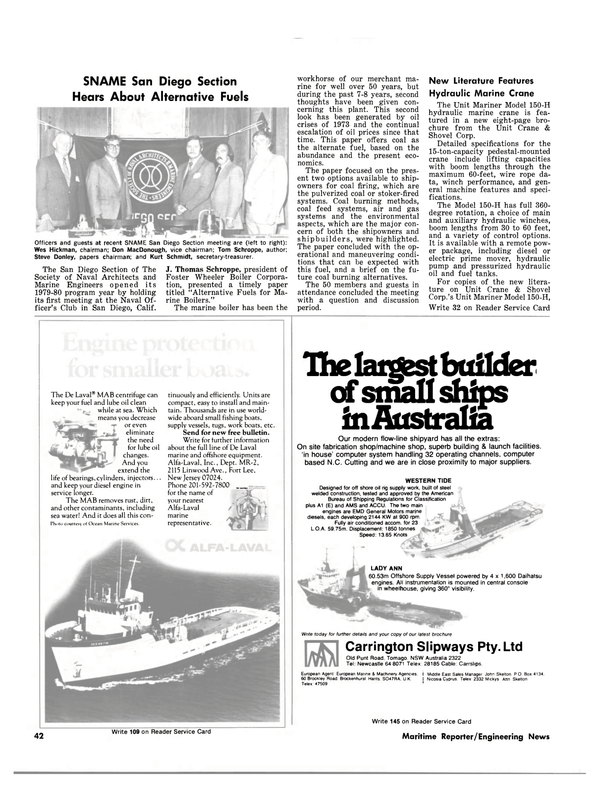 Read First Of Two Tugs To Sembawang Towing— More To Be Ordered in Pdf, Flash or Html5 edition of December 15, 1980 Maritime Reporter