The 86th Annual Meeting of The Society of Naval Architects and Marine Engineers, held at the New York Hilton Hotel in November, brought together the leaders in shipbuilding and ship operation, not only from the United States but worldwide. The wide ranging technical papers presented during the three-day meeting have added considerable knowledge in the fields of ship design, construction and operation.

Robert T. Young, who will have completed his term as president of the Society at the end of this year, presided over the business, technical and social meetings. In his annual address, Mr. Young stated that there has become a more positive sentiment on the part of the public and the government towards the marine industry and, in particular, in the area of energy-related marine activity.

Elaborating on this theme, he said, "The harnessing of energy is one of the pillars upon which this nation's industrial greatness and advanced standard of living have been built and for this, credit must go in part to the maritime industry for making fuels so accessible. Without ships to transport it, without drilling units to explore and recover it, and without all the other peripheral marine vessels, equipment and activities, this country's energy supply would be insufficient to say the very least.

"We all know the integral position the maritime industry holds in the energy lifeline of the United States and if the demand for petroleum and other fuel sources continues unabated, which it will by all estimations, this demand can only be fully satisfied through a vigorous maritime industry.

"This means deepwater terminals to receive VLCCs which will allow the movement of petroleum products onto our shores more efficiently and economically; it means augmented offshore drilling to reduce dependency on foreign petroleum supplies; it means accelerated development of alternate energy sources from the sea; it means increased acceptance of liquefied gas vessels and terminals, and it means the fostering of all other marine activities related to exploration, extraction and transportation of energy sources.

"Though in the past, the public and government have been rather torpid in their willingness or ability to appreciate these necessities, that mood appears to be changing.

Increases of government action and public endorsement suggest an increasing recognition and confidence that the maritime industry is able to build sophisticated structures with the assurance of minimum risk to life and littoral." Mr. Young also pointed to the recent announcements from several companies pertaining to the modernization and additions to their containership and ro/ro fleets and the ordering of eight new dry-bulk carriers in a U.S. yard as signs of renewed vigor in the shipbuilding industry.

Charles W. Robinson, vice-chairman of the board and a member of the Executive Committee of Blyth Eastman Dillon & Co., Incorporated, was the speaker at the Annual Banquet. From 1964 until 1974, Mr. Robinson was president of the Marcona Corporation.

At that company he perfected the system that handles iron-ore slurry aboard special ocean carriers. Just prior to the Banquet, he returned from an official mission of U.S.

business executives sponsored by the Department of State to Southeast Asia.

Technical Sessions A total of 14 papers were presented during the technical sessions at the Annual Meeting. There was literally "something for everyone," from highly mathematical treatises on ship motions and propeller-blade loading which satisfied the most ardent "integral chaser" to some interesting ship descriptions of the modern so-called heavylift ships and two new barge carriers for the Soviet Union being built in Finland.

Structural design and fabrication were covered by a paper on aluminum welding and appurtenant distortion, as well as papers on the effect of hull-girder stiffness varia- tion on ship structural performance, and on the development and application of a computer- controlled frame bender. The structural papers also included a description of some of the most interesting developments of the past two years in using prestressed concrete in the ocean.

Marine engineers showed a great deal of interest in the paper analyzing a high-power, water-cooled electric propulsion system, and the more adventurous among the members were pleased with a report and paper on the 1977 Arctic probe of the Canadian Coast Guard icebreaker CCGS Louis S. St. Laurent.

The authors brought a wealth of experience in naval architecture and marine engineering to the meetings and represented private industry, the government and academia.

The authors from overseas included A.M.

The papers were presented simultaneously in morning and afternoon sessions in the hotel's Trianon and Mercury Ballrooms. Written and spontaneous discussions were presented after each paper.

The Society will publish all the papers, together with the discussions and author's closures in the next issue of the Transactions.

Awards An array of prizes and awards were presented to a number of prominent members of the Society at ceremonies held during the Annual Meeting.

The David W. Taylor Medal, which is given every year for "notable achievement in naval architecture and marine engineering," was awarded to Mr. Nachtsheim. He is a 1947 graduate of Webb Institute of Naval Architecture and spent nearly 15 years with the Navy Department. He joined the Maritime Administration in 1962 and has risen to assistant administrator for operations, reporting to the Assistant Secretary of Commerce for Maritime Affairs.

Admiral Benkert, who received the Vice Admiral "Jerry" Land Medal for "outstanding accomplishment in the marine field," has just this year completed an illustrious career with the U.S. Coast Guard, spending the past eight years as chief, Office of Merchant Marine Safety. During his tenure many significant international agreements concerning the safety of ships were made to the benefit of all.

The Davidson Medal, awarded every two years, went to Dr. Landweber, one of the country's foremost hydrodynamicists and experts on fluid flow. His first technical paper was written in 1932 and since that time he has written more than one hundred papers— some of which are of prime technical importance.

The Davidson Medal is awarded for "outstanding scientific accomplishment in ship research." At the Society's President's Luncheon the following awards were presented.

The "Captain Joseph H. Linnard Prize" for 1978 was presented to Geoffrey G. Cox and Adrian R. Lloyd for their paper, "A Hydrodynamic Design Basis for Navy Ship Roll Motion Stabilization." This prize is given to the author or authors of the best paper contributed to the Transactions of the Society at its Annual Meeting the preceding year.

The "Vice Admiral E.L. Cochrane Award" for 1978 for the best paper delivered before a Section of the Society, was presented to John R. Kane for his paper, "The Speed of the S.S. United States," delivered at the Hampton Roads Section on November 8, 1977.

The "Graduate Paper Honor Prize" for 1978 was awarded to M.S. Triantafyllou for his paper, "Computer Aided Propeller Preliminary Design Using the B-Series," delivered at the New England Section on September 23, 1977.

The "Undergraduate Paper Honor Prize" for 1978 was awarded to James Roberts for his paper, "Preliminary Design of a 43m Wetflsh Stern Trawler," delivered at the Eastern Canadian Section on March 14, 1978.

Certificates of Appreciation were awarded to Everett A. Catlin for his outstanding leadership as chairman of the ad hoc Committee on Bylaws, and to Judith Harding for loyal and devoted service to the staff of the Society 1965-1978. She will retire at the end of this year.

In closing President Young stated "the SNAME is a wonderful and productive organization.

It has seen some lean times but with fortitude it has always seen these times overcome . . . . it has been a privilege to serve SNAME as president. I greatly appreciate your support during the past year in advancing the goals of SNAME and I urge your continued participation in the years ahead." 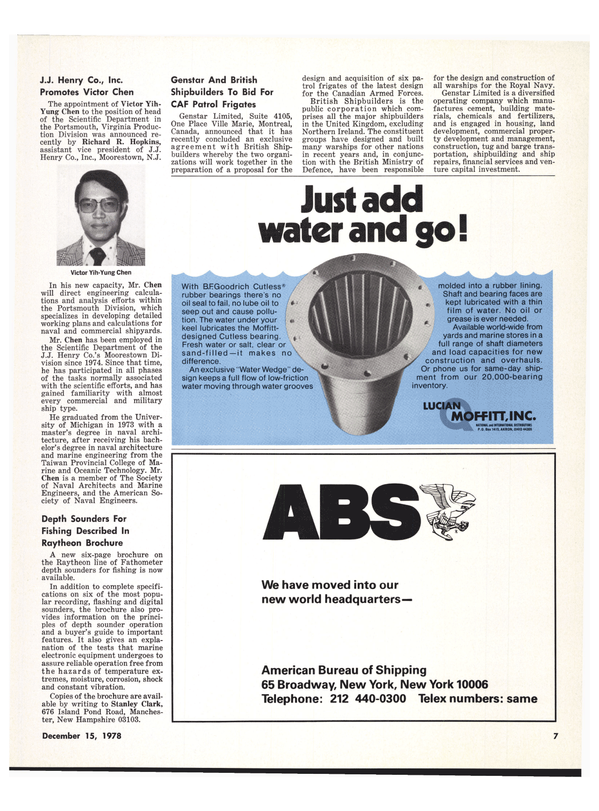