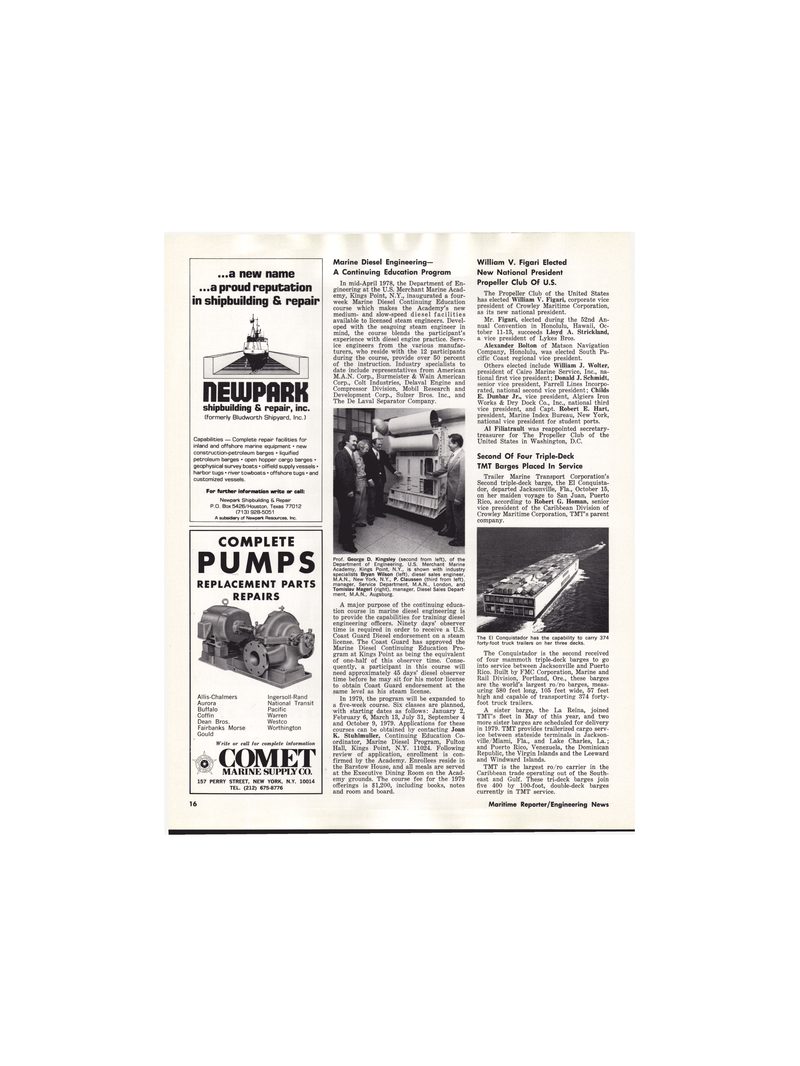 For further information write or call:

A subsidiary of Newpark Resources, Inc.

In mid-April 1978, the Department of En- gineering at the U.S. Merchant Marine Acad- emy, Kings Point, N.Y., inaugurated a four- week Marine Diesel Continuing Education course which makes the Academy's new medium- and slow-speed diesel facilities available to licensed steam engineers. Devel- oped with the seagoing steam engineer in mind, the course blends the participant's experience with diesel engine practice. Serv- ice engineers from the various manufac- turers, who reside with the 12 participants during the course, provide over 50 percent of the instruction. Industry specialists to date include representatives from American

Prof. George D. Kingsley (second from left), of the

Coast Guard Diesel endorsement on a steam license. The Coast Guard has approved the

Marine Diesel Continuing Education Pro- gram at Kings Point as being the equivalent of one-half of this observer time. Conse- quently, a participant in this course will need approximately 45 days' diesel observer time before he may sit for his motor license to obtain Coast Guard endorsement at the same level as his steam license.

In 1979, the program will be expanded to a five-week course. Six classes are planned, with starting dates as follows: January 2,

February 6, March 13, July 31, September 4 and October 9, 1979. Applications for these courses can be obtained by contacting Joan

Hall, Kings Point, N.Y. 11024. Following review of application, enrollment is con- firmed by the Academy. Enrollees reside in the Barstow House, and all meals are served at the Executive Dining Room on the Acad- emy grounds. The course fee for the 1979 offerings is $1,200, including books, notes and room and board.

Rico, according to Robert G. Homan, senior vice president of the Caribbean Division of

The El Conquistador has the capability to carry 374 forty-foot truck trailers on her three decks.

TMT's fleet in May of this year, and two more sister barges are scheduled for delivery in 1979. TMT provides trailerized cargo serv- ice between stateside terminals in Jackson- ville/Miami, Fla., and Lake Charles, La.; and Puerto Rico, Venezuela, the Dominican

Republic, the Virgin Islands and the Leeward and Windward Islands.

TMT is the largest ro/ro carrier in the

Caribbean trade operating out of the South- east and Gulf. These tri-deck barges join five 400 by 100-foot, double-deck barges currently in TMT service.