The world today is filled with contradictions. In the context of this timely Super Ocean Carrier Conference, many of those paradoxes have a particular relevance.

Instead of peace and tranquility, there is turmoil and confusion. Instead of confidence in traditional procedures, there is doubt. Instead of certainty as to energy sources, there is uncertainty as to future energy availabilities. No two forecasts of supply and demand for fuels agree, and no two sets of pertinent statistics coincide. Public statements are frequently contradictory.

Moreover, not all analysts agree as to the short and long-term impact of present energy problems.

There are, of course, many other contradictions which affect the life style of people everywhere. But this much can be said with confidence : the availability and transport of crude oil and petroleum products will profoundly influence all of mankind until the millenium, which, in Biblical terms, is defined as a period of great happiness, good government and freedom from wickedness.

And, wickedness might be interpreted to include price manipulations which could undermine economic stability in all parts of the globe.

Again, in the sense that we meet here, pursuit of the millenium introduces another contradiction.

While energy conservation programs have prompted a far-ranging attitude of thinking smaller and smaller, particularly with respect to automobiles, the opposite pre- vails with respect to tankers. The trend toward bigger, and still bigger, ocean carriers is expected to continue. The economics of ocean transportation and the increasing and continuing, almost universal, demand for energy supplies are shaping and propelling this trend.

This upward thrust started in the 1950s with the placement of orders for 100,000-dwt tankers. Tankers of 200,000 dwt and larger followed in the late 1960s, and last year the first tankers of over 475,000 dwt were delivered. In 1980, the largest super ocean carrier afloat could well approximate 1,000,000 dwt, and by that time nearly half the world tanker fleet could well be composed of vessels larger than 250,000 dwt.

To date, the consequences of the Yom Kippur war have not dampened this trend toward bigger and bigger carriers. Shipyard contracts for additional super ocean carriers were placed in November and December of last year, and others are about to be awarded here and abroad. Assuming an early and satisfactory resolution of Arab/Israeli differences—a goal earnestly sought by the United States—the demand for very large (VLCC) and ultra large (ULCC) tankers could be accentuated.

These supertanker potentials are not being ignored by American shipbuilders. Construction of 225,- 000-dwt and 265,000-dwt vessels are now under way, and the U.S.

shipbuilding industry will shortly have the capability to produce super ocean carriers up to 600,000 dwt. There are indications that a series of 380,000-dwt VLCCs will be ordered from an American yard in the near future. Total U.S. tanker building capacity is also expected to more than double by 1978.

Interestingly, the Congressionally - mandated Presidentially - appointed Commission on American Shipbuilding in October of last year concluded that "where the U.S. shipbuilding industry has the opportunity to build ships in series and has a reasonable stability in its order book, it is fully capable of equaling the productive efficiency in any foreign shipbuilding industry for the construction of similar ships." The Commission, in addition, focused attention on the U.S. ship financing package which, it was noted, "is substantially better than any alternative financing available for the construction and acquisition of foreign- built ships.

Plainly, American shipbuilders are thinking bigger and bigger— as are their counterparts abroad.

By reason of improved techniques, expanded production facilities and attention to cost reduction opportunities, the gap between U.S. and foreign ship construction prices is narrowing. As the gap closes, as productivity quickens, as the pattern of relative inflation changes, the price disadvantage of U.S.

yards, reflecting the higher wages and the higher standard of living of the American economy becomes less crucial, and the American shipbuilding industry should not be counted out as a factor in furnishing tomorrow's requirements for super ocean carriers. There is good reason to believe that its competitive posture will improve as time goes on.

To a substantial degree, that competitive posture will be further influenced by governmental actions in the domestic, geopolitical and economic arenas.

Domestically, the energy problem has already initiated a mandatory fuel allocation system, and more controls are anticipated. The energy crisis and related problems have triggered shortages of steel, aluminum, copper and other basic materials, as well as shortages of castings, forgings, and other components essential to ship construction.

Material purchase lead times are extending, some potential suppliers have been. forced to curtail production, and prices are rising substantially. The economics and output of American shipbuilding are sensitively involved, and the role of Government in assuring that national interests are properly served will no doubt be heavy.

Also, domestically, the Middle East situation has given added impetus to, and prompted added support for, a national policy to assure that up to 30 percent of U.S.

oil imports will be brought to U.S.

refineries in U.S.-flag, U.S.-fouilt tankers. In a world beset with recurring crises, the rationale is that the United States must become more self reliant and independent without reverting to isolationism.

The Congress is expected to act on this matter during the current year, and the prospects for enactment of enabling legislation are considered good. No other nation could reasonably object. A minimum of 70 percent of U.S. oil imports would still be available to ships flying other than the American flag, and as imports increase, in keeping with most long-term forecasts, the tonnage available for movement will increase substantially for both the U.S. tanker fleet as well as the fleets of other countries.

The United States has no desire to reserve transport of all of its waterborne commerce for its own shipping fleet—vessels of other nations shared substantially in recent American grain movements to Russia. On the other hand, the ramifications of the present oil embargo dramatically demonstrate the wisdom of assured supplies in adequate quantities and the logic of assured control of transportation resources in adequate numbers.

Even in these days of detente, the Soviet Union's manifested awareness of the strategic importance of the Arab oil states is not to be treated casually. One can never be sure of the Kremlin's purposes.

But, United States Senator Henry Jackson, who is hardly a neophyte in discerning Russian motivations or in appraising the consequences of the present energy crunch, has warned: "I regard the Soviet Union as an opportunistic hotel iburglar who walks down the corridors trying all the door handles to see which door is open." Through well-intentioned leadership and "shuttle" diplomacy, the United States is striving to energize an effective compromise between the Arabs and the Israelis to restore some modicum of stability in the Middle East. Secretary of State Henry Kissinger's latest travels are directed toward this objective. But, more than that, the countervailing force of U.S.

Naval units in the Mediterranean area must be strengthened and modernized if the threat of the oil jugular by Russian power is to be continuously neutralized.

Turning to another point, the implications of recent oil price increases are so staggering that, in the judgment of some analysts, they threaten the economic and monetary stability of the world.

Price, not embargo, it is said, is the key issue. These same authorities contend that restoration of Middle East oil production cuts (which Japan, Europe and lesser developed countries desperately need) and abandonment of the oil embargo (which the United States earnestly seeks) could lead to widespread crisis.

The 400-percent increase set in December by the oil-producing nations could shift the financial resources of the oil-consuming nations, it is explained, to the extent that worldwide economic upheaval and depression, accompanied by more political and social unrest, could follow. This grave threat argues forcefully for some kind of cooperative action, such as President Nixon and Secretary Kissinger have proposed, among producing and consuming nations to prevent global chaos. For the sake of equilibrium, the price of oil should be negotiated by both parties in a way that will preserve the stability of each, as well as the stability of the balance of the world.

Clearly, the energy problem transcends national boundaries, and all governments must think bigger and bigger in terms of appropriate solutions. Transportation of crude oil and petroleum products will be important to these solutions. It is of course technologically possible to build and operate bigger and bigger tankers and, should the sources and the price of oil be stabilized, as they must be, the optimum operational economics of these super ocean carriers will be increasingly attractive. 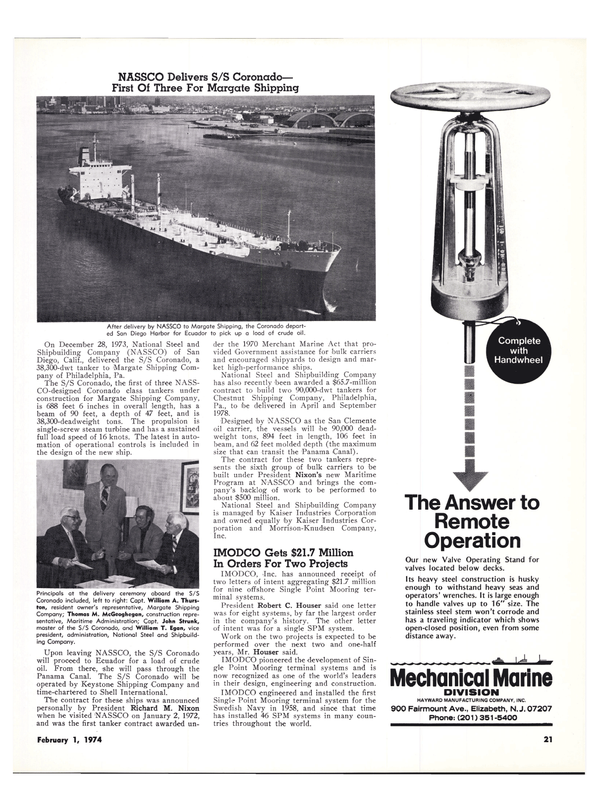