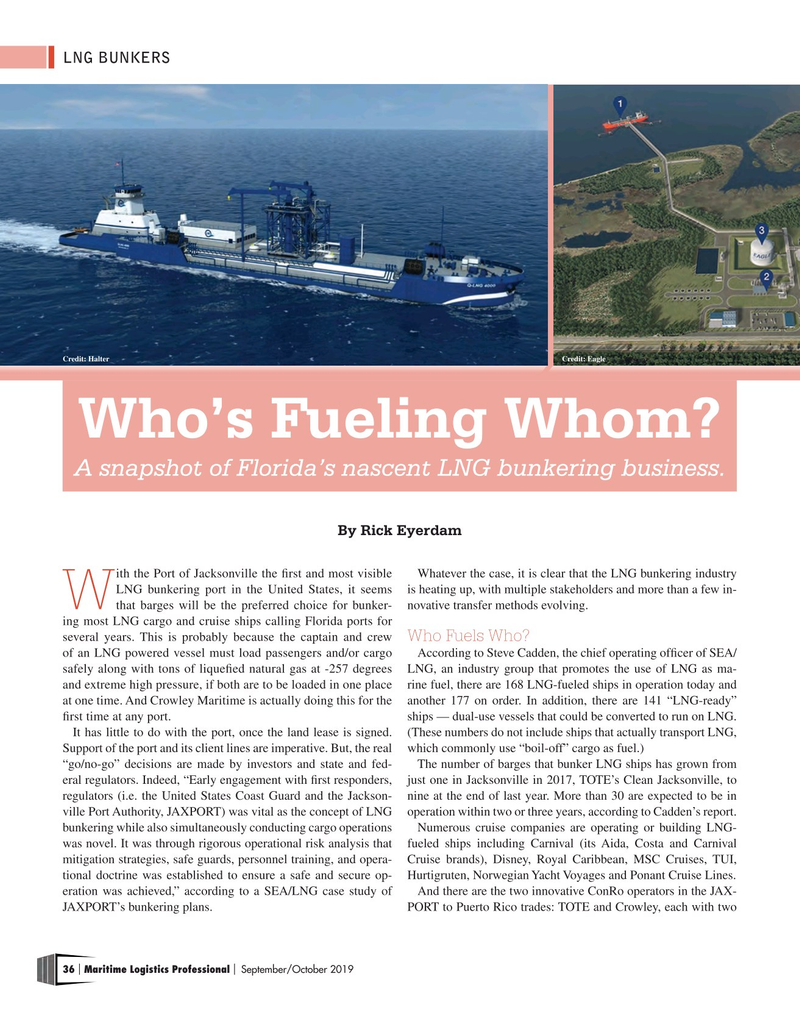 By Rick Eyerdam ith the Port of Jacksonville the frst and most visible Whatever the case, it is clear that the LNG bunkering industry

LNG bunkering port in the United States, it seems is heating up, with multiple stakeholders and more than a few in-

W that barges will be the preferred choice for bunker- novative transfer methods evolving. ing most LNG cargo and cruise ships calling Florida ports for several years. This is probably because the captain and crew Who Fuels Who?

of an LNG powered vessel must load passengers and/or cargo According to Steve Cadden, the chief operating offcer of SEA/ safely along with tons of liquefed natural gas at -257 degrees LNG, an industry group that promotes the use of LNG as ma- and extreme high pressure, if both are to be loaded in one place rine fuel, there are 168 LNG-fueled ships in operation today and at one time. And Crowley Maritime is actually doing this for the another 177 on order. In addition, there are 141 “LNG-ready” frst time at any port. ships — dual-use vessels that could be converted to run on LNG.

It has little to do with the port, once the land lease is signed. (These numbers do not include ships that actually transport LNG,

Support of the port and its client lines are imperative. But, the real which commonly use “boil-off” cargo as fuel.) “go/no-go” decisions are made by investors and state and fed- The number of barges that bunker LNG ships has grown from eral regulators. Indeed, “Early engagement with frst responders, just one in Jacksonville in 2017, TOTE’s Clean Jacksonville, to regulators (i.e. the United States Coast Guard and the Jackson- nine at the end of last year. More than 30 are expected to be in ville Port Authority, JAXPORT) was vital as the concept of LNG operation within two or three years, according to Cadden’s report.

bunkering while also simultaneously conducting cargo operations Numerous cruise companies are operating or building LNG- was novel. It was through rigorous operational risk analysis that fueled ships including Carnival (its Aida, Costa and Carnival mitigation strategies, safe guards, personnel training, and opera- Cruise brands), Disney, Royal Caribbean, MSC Cruises, TUI, tional doctrine was established to ensure a safe and secure op- Hurtigruten, Norwegian Yacht Voyages and Ponant Cruise Lines. eration was achieved,” according to a SEA/LNG case study of And there are the two innovative ConRo operators in the JAX-