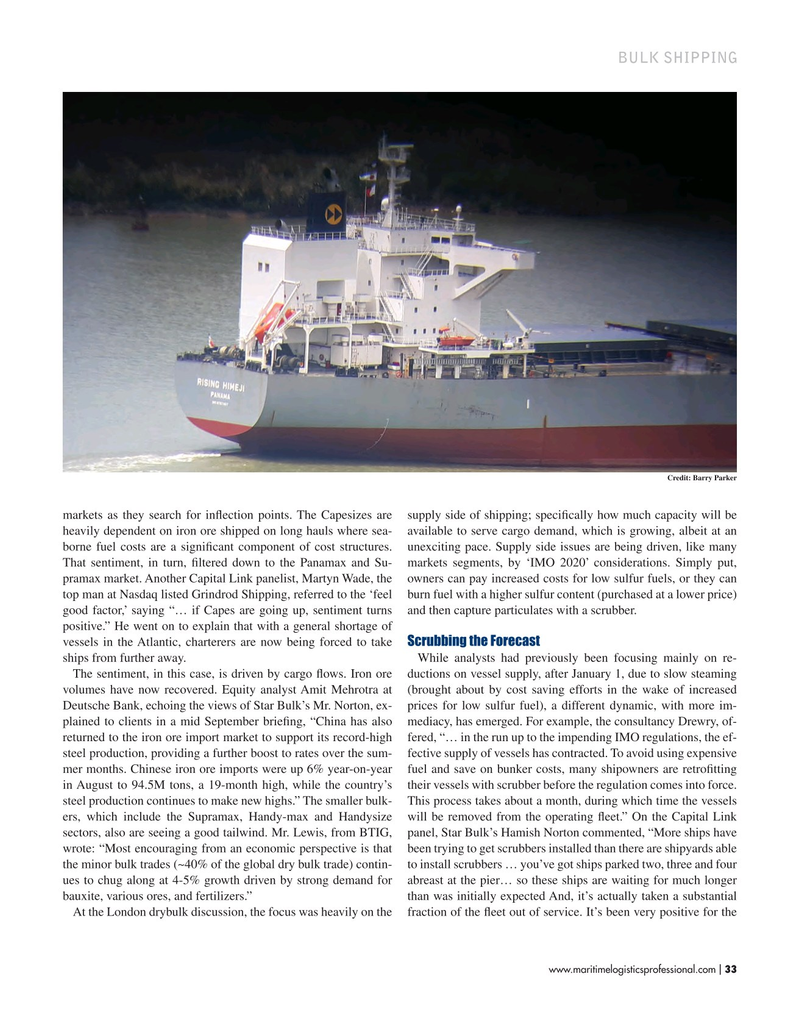 Credit: Barry Parker markets as they search for infection points. The Capesizes are supply side of shipping; specifcally how much capacity will be heavily dependent on iron ore shipped on long hauls where sea- available to serve cargo demand, which is growing, albeit at an borne fuel costs are a signifcant component of cost structures. unexciting pace. Supply side issues are being driven, like many

That sentiment, in turn, fltered down to the Panamax and Su- markets segments, by ‘IMO 2020’ considerations. Simply put, pramax market. Another Capital Link panelist, Martyn Wade, the owners can pay increased costs for low sulfur fuels, or they can top man at Nasdaq listed Grindrod Shipping, referred to the ‘feel burn fuel with a higher sulfur content (purchased at a lower price) good factor,’ saying “… if Capes are going up, sentiment turns and then capture particulates with a scrubber. positive.” He went on to explain that with a general shortage of vessels in the Atlantic, charterers are now being forced to take Scrubbing the Forecast ships from further away. While analysts had previously been focusing mainly on re-

The sentiment, in this case, is driven by cargo fows. Iron ore ductions on vessel supply, after January 1, due to slow steaming volumes have now recovered. Equity analyst Amit Mehrotra at (brought about by cost saving efforts in the wake of increased

Deutsche Bank, echoing the views of Star Bulk’s Mr. Norton, ex- prices for low sulfur fuel), a different dynamic, with more im- plained to clients in a mid September briefng, “China has also mediacy, has emerged. For example, the consultancy Drewry, of- returned to the iron ore import market to support its record-high fered, “… in the run up to the impending IMO regulations, the ef- steel production, providing a further boost to rates over the sum- fective supply of vessels has contracted. To avoid using expensive mer months. Chinese iron ore imports were up 6% year-on-year fuel and save on bunker costs, many shipowners are retroftting in August to 94.5M tons, a 19-month high, while the country’s their vessels with scrubber before the regulation comes into force. steel production continues to make new highs.” The smaller bulk- This process takes about a month, during which time the vessels ers, which include the Supramax, Handy-max and Handysize will be removed from the operating feet.” On the Capital Link sectors, also are seeing a good tailwind. Mr. Lewis, from BTIG, panel, Star Bulk’s Hamish Norton commented, “More ships have wrote: “Most encouraging from an economic perspective is that been trying to get scrubbers installed than there are shipyards able the minor bulk trades (~40% of the global dry bulk trade) contin- to install scrubbers … you’ve got ships parked two, three and four ues to chug along at 4-5% growth driven by strong demand for abreast at the pier… so these ships are waiting for much longer bauxite, various ores, and fertilizers.” than was initially expected And, it’s actually taken a substantial

At the London drybulk discussion, the focus was heavily on the fraction of the feet out of service. It’s been very positive for the www.maritimelogisticsprofessional.com 33