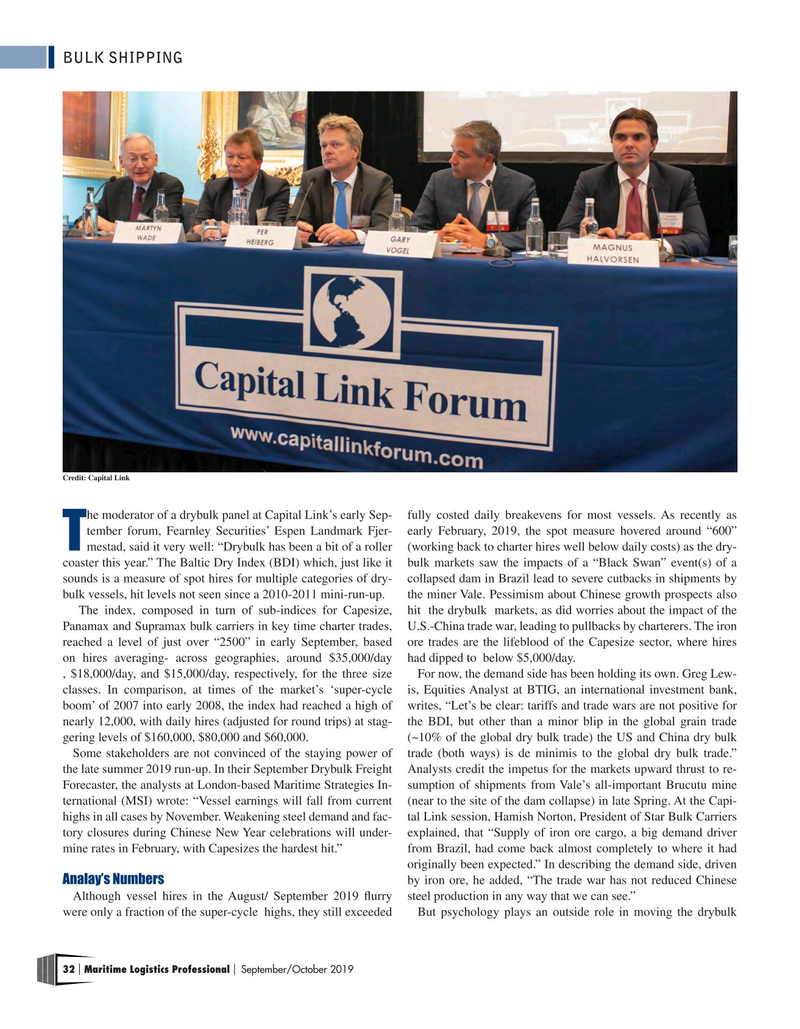 Tmestad, said it very well: “Drybulk has been a bit of a roller (working back to charter hires well below daily costs) as the dry- coaster this year.” The Baltic Dry Index (BDI) which, just like it bulk markets saw the impacts of a “Black Swan” event(s) of a sounds is a measure of spot hires for multiple categories of dry- collapsed dam in Brazil lead to severe cutbacks in shipments by bulk vessels, hit levels not seen since a 2010-2011 mini-run-up. the miner Vale. Pessimism about Chinese growth prospects also The index, composed in turn of sub-indices for Capesize, hit the drybulk markets, as did worries about the impact of the

Panamax and Supramax bulk carriers in key time charter trades, U.S.-China trade war, leading to pullbacks by charterers. The iron reached a level of just over “2500” in early September, based ore trades are the lifeblood of the Capesize sector, where hires on hires averaging- across geographies, around $35,000/day had dipped to below $5,000/day. , $18,000/day, and $15,000/day, respectively, for the three size For now, the demand side has been holding its own. Greg Lew- classes. In comparison, at times of the market’s ‘super-cycle is, Equities Analyst at BTIG, an international investment bank, boom’ of 2007 into early 2008, the index had reached a high of writes, “Let’s be clear: tariffs and trade wars are not positive for nearly 12,000, with daily hires (adjusted for round trips) at stag- the BDI, but other than a minor blip in the global grain trade gering levels of $160,000, $80,000 and $60,000. (~10% of the global dry bulk trade) the US and China dry bulk

Some stakeholders are not convinced of the staying power of trade (both ways) is de minimis to the global dry bulk trade.” the late summer 2019 run-up. In their September Drybulk Freight Analysts credit the impetus for the markets upward thrust to re-

Forecaster, the analysts at London-based Maritime Strategies In- sumption of shipments from Vale’s all-important Brucutu mine ternational (MSI) wrote: “Vessel earnings will fall from current (near to the site of the dam collapse) in late Spring. At the Capi- highs in all cases by November. Weakening steel demand and fac- tal Link session, Hamish Norton, President of Star Bulk Carriers tory closures during Chinese New Year celebrations will under- explained, that “Supply of iron ore cargo, a big demand driver mine rates in February, with Capesizes the hardest hit.” from Brazil, had come back almost completely to where it had originally been expected.” In describing the demand side, driven

Analay’s Numbers by iron ore, he added, “The trade war has not reduced Chinese

Although vessel hires in the August/ September 2019 furry steel production in any way that we can see.” were only a fraction of the super-cycle highs, they still exceeded But psychology plays an outside role in moving the drybulk 32 Maritime Logistics Professional September/October 2019 | |