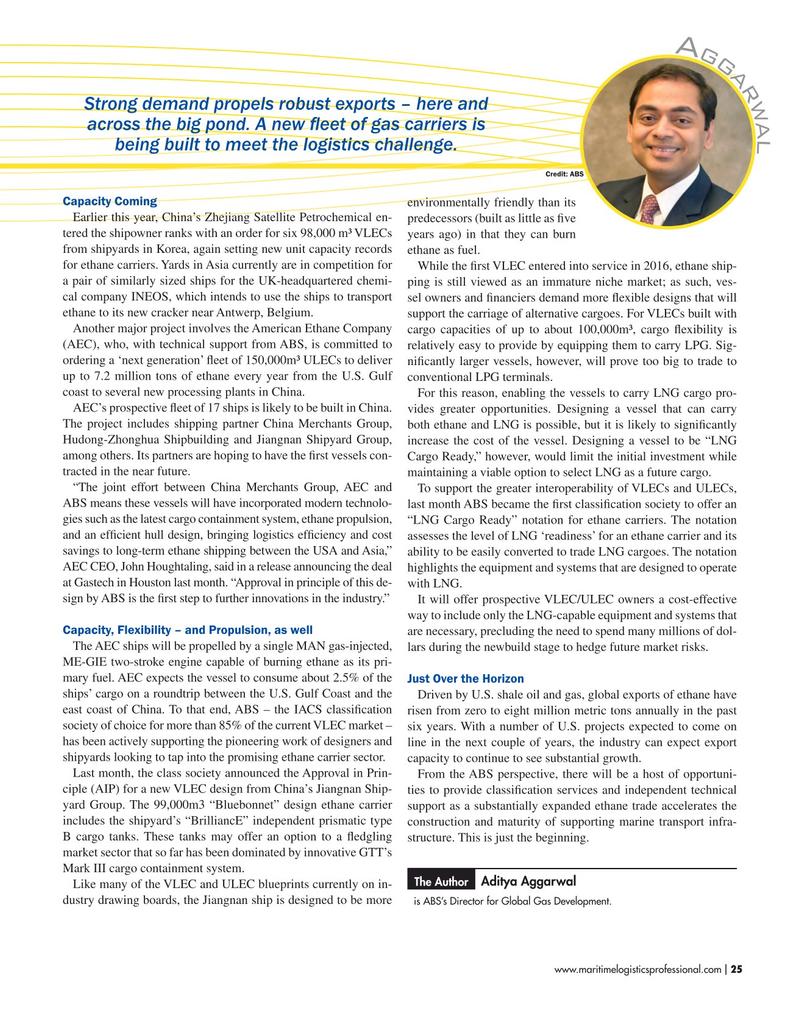 A across the big pond. A new feet of gas carriers is l being built to meet the logistics challenge.

Capacity Coming environmentally friendly than its

Earlier this year, China’s Zhejiang Satellite Petrochemical en- predecessors (built as little as fve tered the shipowner ranks with an order for six 98,000 m³ VLECs years ago) in that they can burn from shipyards in Korea, again setting new unit capacity records ethane as fuel.

for ethane carriers. Yards in Asia currently are in competition for While the frst VLEC entered into service in 2016, ethane ship- a pair of similarly sized ships for the UK-headquartered chemi- ping is still viewed as an immature niche market; as such, ves- cal company INEOS, which intends to use the ships to transport sel owners and fnanciers demand more fexible designs that will ethane to its new cracker near Antwerp, Belgium. support the carriage of alternative cargoes. For VLECs built with

Another major project involves the American Ethane Company cargo capacities of up to about 100,000m³, cargo fexibility is (AEC), who, with technical support from ABS, is committed to relatively easy to provide by equipping them to carry LPG. Sig- ordering a ‘next generation’ feet of 150,000m³ ULECs to deliver nifcantly larger vessels, however, will prove too big to trade to up to 7.2 million tons of ethane every year from the U.S. Gulf conventional LPG terminals.

coast to several new processing plants in China. For this reason, enabling the vessels to carry LNG cargo pro-

AEC’s prospective feet of 17 ships is likely to be built in China. vides greater opportunities. Designing a vessel that can carry

The project includes shipping partner China Merchants Group, both ethane and LNG is possible, but it is likely to signifcantly

Hudong-Zhonghua Shipbuilding and Jiangnan Shipyard Group, increase the cost of the vessel. Designing a vessel to be “LNG among others. Its partners are hoping to have the frst vessels con- Cargo Ready,” however, would limit the initial investment while tracted in the near future. maintaining a viable option to select LNG as a future cargo.

“The joint effort between China Merchants Group, AEC and To support the greater interoperability of VLECs and ULECs,

ABS means these vessels will have incorporated modern technolo- last month ABS became the frst classifcation society to offer an gies such as the latest cargo containment system, ethane propulsion, “LNG Cargo Ready” notation for ethane carriers. The notation and an effcient hull design, bringing logistics effciency and cost assesses the level of LNG ‘readiness’ for an ethane carrier and its savings to long-term ethane shipping between the USA and Asia,” ability to be easily converted to trade LNG cargoes. The notation

AEC CEO, John Houghtaling, said in a release announcing the deal highlights the equipment and systems that are designed to operate at Gastech in Houston last month. “Approval in principle of this de- with LNG.

sign by ABS is the frst step to further innovations in the industry.” It will offer prospective VLEC/ULEC owners a cost-effective way to include only the LNG-capable equipment and systems that

Capacity, Flexibility – and Propulsion, as well are necessary, precluding the need to spend many millions of dol-

The AEC ships will be propelled by a single MAN gas-injected, lars during the newbuild stage to hedge future market risks.

ME-GIE two-stroke engine capable of burning ethane as its pri- mary fuel. AEC expects the vessel to consume about 2.5% of the Just Over the Horizon ships’ cargo on a roundtrip between the U.S. Gulf Coast and the Driven by U.S. shale oil and gas, global exports of ethane have east coast of China. To that end, ABS – the IACS classifcation risen from zero to eight million metric tons annually in the past society of choice for more than 85% of the current VLEC market – six years. With a number of U.S. projects expected to come on has been actively supporting the pioneering work of designers and line in the next couple of years, the industry can expect export shipyards looking to tap into the promising ethane carrier sector. capacity to continue to see substantial growth.

Last month, the class society announced the Approval in Prin- From the ABS perspective, there will be a host of opportuni- ciple (AIP) for a new VLEC design from China’s Jiangnan Ship- ties to provide classifcation services and independent technical yard Group. The 99,000m3 “Bluebonnet” design ethane carrier support as a substantially expanded ethane trade accelerates the includes the shipyard’s “BrilliancE” independent prismatic type construction and maturity of supporting marine transport infra-

B cargo tanks. These tanks may offer an option to a fedgling structure. This is just the beginning.

Like many of the VLEC and ULEC blueprints currently on in- dustry drawing boards, the Jiangnan ship is designed to be more is ABS’s Director for Global Gas Development.