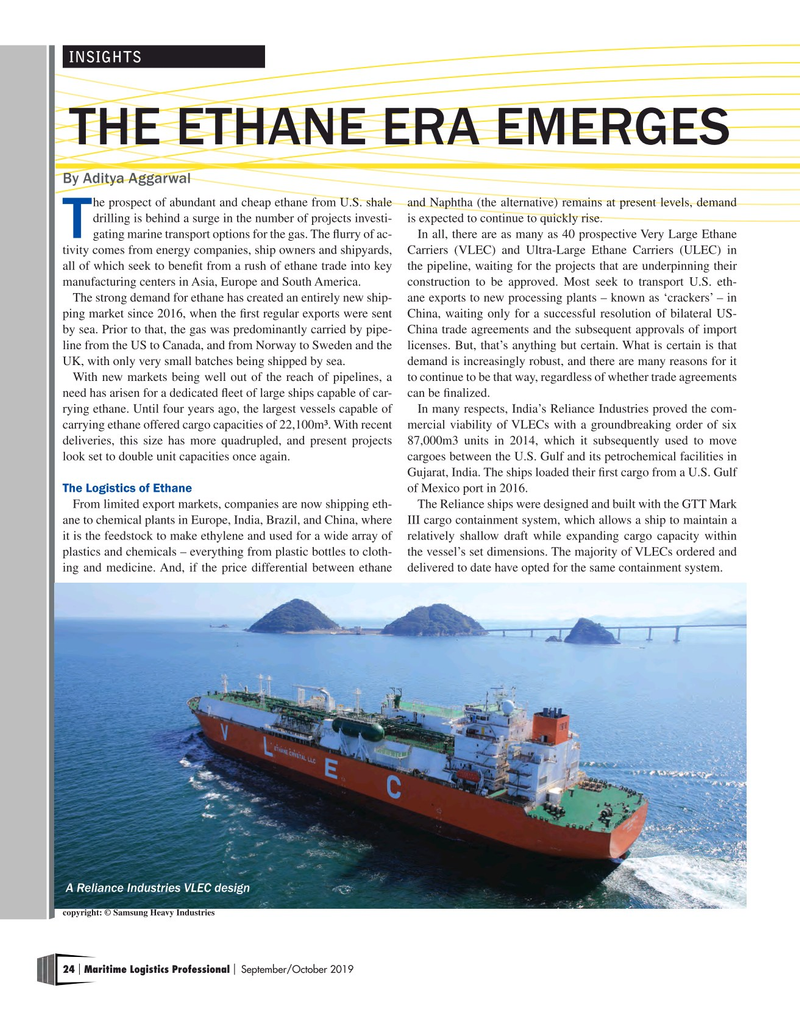 By Aditya Aggarwal he prospect of abundant and cheap ethane from U.S. shale and Naphtha (the alternative) remains at present levels, demand drilling is behind a surge in the number of projects investi- is expected to continue to quickly rise.

T gating marine transport options for the gas. The furry of ac- In all, there are as many as 40 prospective Very Large Ethane tivity comes from energy companies, ship owners and shipyards, Carriers (VLEC) and Ultra-Large Ethane Carriers (ULEC) in all of which seek to beneft from a rush of ethane trade into key the pipeline, waiting for the projects that are underpinning their manufacturing centers in Asia, Europe and South America. construction to be approved. Most seek to transport U.S. eth-

The strong demand for ethane has created an entirely new ship- ane exports to new processing plants – known as ‘crackers’ – in ping market since 2016, when the frst regular exports were sent China, waiting only for a successful resolution of bilateral US- by sea. Prior to that, the gas was predominantly carried by pipe- China trade agreements and the subsequent approvals of import line from the US to Canada, and from Norway to Sweden and the licenses. But, that’s anything but certain. What is certain is that

UK, with only very small batches being shipped by sea. demand is increasingly robust, and there are many reasons for it

With new markets being well out of the reach of pipelines, a to continue to be that way, regardless of whether trade agreements need has arisen for a dedicated feet of large ships capable of car- can be fnalized.

rying ethane. Until four years ago, the largest vessels capable of In many respects, India’s Reliance Industries proved the com- carrying ethane offered cargo capacities of 22,100m³. With recent mercial viability of VLECs with a groundbreaking order of six deliveries, this size has more quadrupled, and present projects 87,000m3 units in 2014, which it subsequently used to move look set to double unit capacities once again. cargoes between the U.S. Gulf and its petrochemical facilities in

Gujarat, India. The ships loaded their frst cargo from a U.S. Gulf

The Logistics of Ethane of Mexico port in 2016.

From limited export markets, companies are now shipping eth- The Reliance ships were designed and built with the GTT Mark ane to chemical plants in Europe, India, Brazil, and China, where III cargo containment system, which allows a ship to maintain a it is the feedstock to make ethylene and used for a wide array of relatively shallow draft while expanding cargo capacity within plastics and chemicals – everything from plastic bottles to cloth- the vessel’s set dimensions. The majority of VLECs ordered and ing and medicine. And, if the price differential between ethane delivered to date have opted for the same containment system.