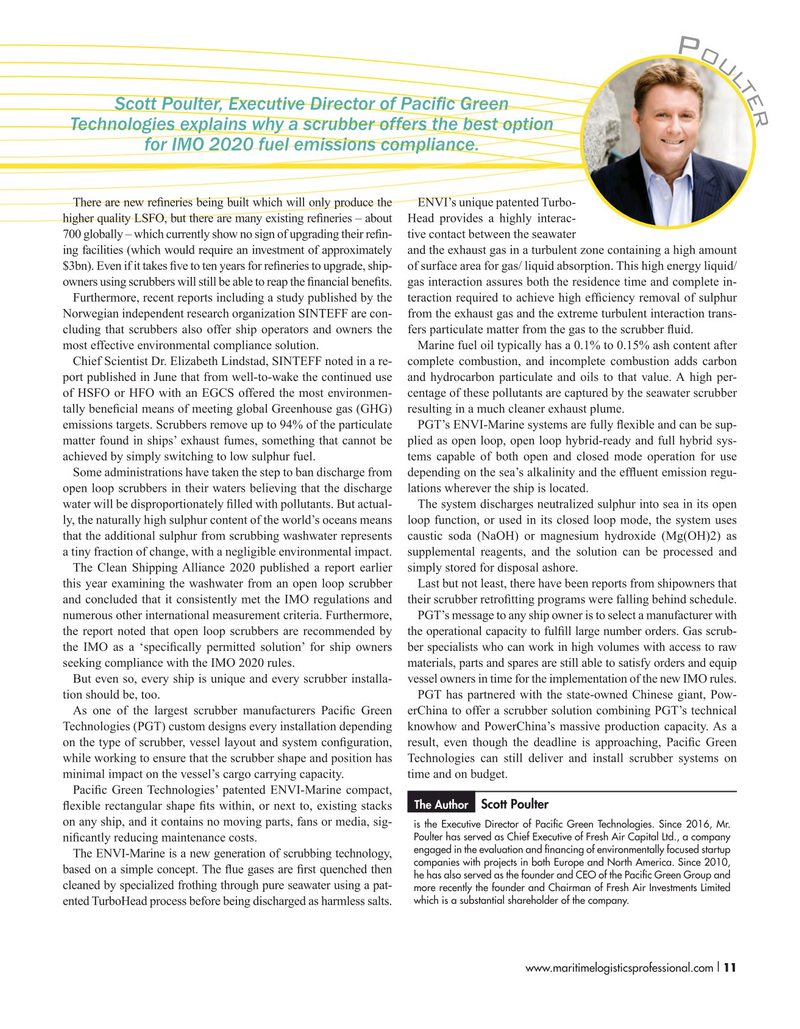 There are new refneries being built which will only produce the ENVI’s unique patented Turbo- higher quality LSFO, but there are many existing refneries – about Head provides a highly interac- 700 globally – which currently show no sign of upgrading their refn- tive contact between the seawater ing facilities (which would require an investment of approximately and the exhaust gas in a turbulent zone containing a high amount $3bn). Even if it takes fve to ten years for refneries to upgrade, ship- of surface area for gas/ liquid absorption. This high energy liquid/ owners using scrubbers will still be able to reap the fnancial benefts. gas interaction assures both the residence time and complete in-

Furthermore, recent reports including a study published by the teraction required to achieve high effciency removal of sulphur

Norwegian independent research organization SINTEFF are con- from the exhaust gas and the extreme turbulent interaction trans- cluding that scrubbers also offer ship operators and owners the fers particulate matter from the gas to the scrubber fuid. most effective environmental compliance solution. Marine fuel oil typically has a 0.1% to 0.15% ash content after

Chief Scientist Dr. Elizabeth Lindstad, SINTEFF noted in a re- complete combustion, and incomplete combustion adds carbon port published in June that from well-to-wake the continued use and hydrocarbon particulate and oils to that value. A high per- of HSFO or HFO with an EGCS offered the most environmen- centage of these pollutants are captured by the seawater scrubber tally benefcial means of meeting global Greenhouse gas (GHG) resulting in a much cleaner exhaust plume. emissions targets. Scrubbers remove up to 94% of the particulate PGT’s ENVI-Marine systems are fully fexible and can be sup- matter found in ships’ exhaust fumes, something that cannot be plied as open loop, open loop hybrid-ready and full hybrid sys- achieved by simply switching to low sulphur fuel. tems capable of both open and closed mode operation for use

Some administrations have taken the step to ban discharge from depending on the sea’s alkalinity and the effuent emission regu- open loop scrubbers in their waters believing that the discharge lations wherever the ship is located. water will be disproportionately flled with pollutants. But actual- The system discharges neutralized sulphur into sea in its open ly, the naturally high sulphur content of the world’s oceans means loop function, or used in its closed loop mode, the system uses that the additional sulphur from scrubbing washwater represents caustic soda (NaOH) or magnesium hydroxide (Mg(OH)2) as a tiny fraction of change, with a negligible environmental impact. supplemental reagents, and the solution can be processed and

The Clean Shipping Alliance 2020 published a report earlier simply stored for disposal ashore. this year examining the washwater from an open loop scrubber Last but not least, there have been reports from shipowners that and concluded that it consistently met the IMO regulations and their scrubber retroftting programs were falling behind schedule. numerous other international measurement criteria. Furthermore, PGT’s message to any ship owner is to select a manufacturer with the report noted that open loop scrubbers are recommended by the operational capacity to fulfll large number orders. Gas scrub- the IMO as a ‘specifcally permitted solution’ for ship owners ber specialists who can work in high volumes with access to raw seeking compliance with the IMO 2020 rules. materials, parts and spares are still able to satisfy orders and equip

But even so, every ship is unique and every scrubber installa- vessel owners in time for the implementation of the new IMO rules. tion should be, too. PGT has partnered with the state-owned Chinese giant, Pow-

Technologies (PGT) custom designs every installation depending knowhow and PowerChina’s massive production capacity. As a on the type of scrubber, vessel layout and system confguration, result, even though the deadline is approaching, Pacifc Green while working to ensure that the scrubber shape and position has Technologies can still deliver and install scrubber systems on minimal impact on the vessel’s cargo carrying capacity. time and on budget.

The Author fexible rectangular shape fts within, or next to, existing stacks Scott Poulter on any ship, and it contains no moving parts, fans or media, sig- is the Executive Director of Pacifc Green Technologies. Since 2016, Mr.

The ENVI-Marine is a new generation of scrubbing technology, companies with projects in both Europe and North America. Since 2010, based on a simple concept. The fue gases are frst quenched then he has also served as the founder and CEO of the Pacifc Green Group and cleaned by specialized frothing through pure seawater using a pat- more recently the founder and Chairman of Fresh Air Investments Limited which is a substantial shareholder of the company.

ented TurboHead process before being discharged as harmless salts. www.maritimelogisticsprofessional.com 11I