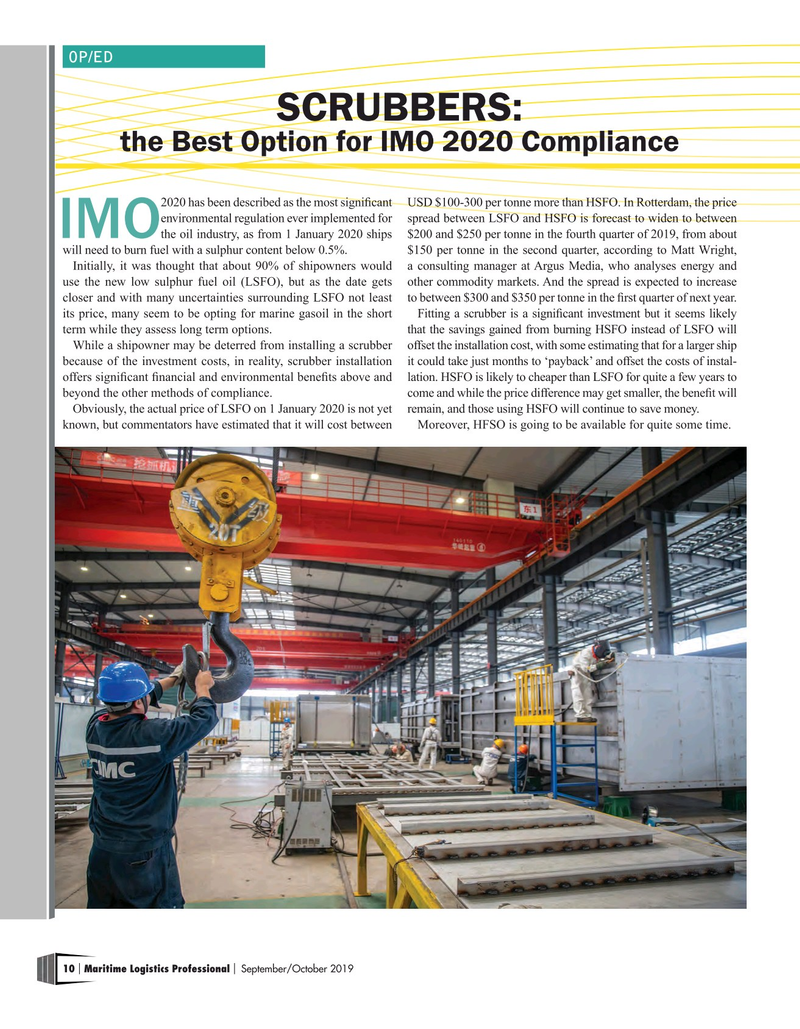 SCRUBBERS: the Best Option for IMO 2020 Compliance 2020 has been described as the most signifcant USD $100-300 per tonne more than HSFO. In Rotterdam, the price environmental regulation ever implemented for spread between LSFO and HSFO is forecast to widen to between

Initially, it was thought that about 90% of shipowners would a consulting manager at Argus Media, who analyses energy and use the new low sulphur fuel oil (LSFO), but as the date gets other commodity markets. And the spread is expected to increase closer and with many uncertainties surrounding LSFO not least to between $300 and $350 per tonne in the frst quarter of next year.

its price, many seem to be opting for marine gasoil in the short Fitting a scrubber is a signifcant investment but it seems likely term while they assess long term options. that the savings gained from burning HSFO instead of LSFO will

While a shipowner may be deterred from installing a scrubber offset the installation cost, with some estimating that for a larger ship because of the investment costs, in reality, scrubber installation it could take just months to ‘payback’ and offset the costs of instal- offers signifcant fnancial and environmental benefts above and lation. HSFO is likely to cheaper than LSFO for quite a few years to beyond the other methods of compliance. come and while the price difference may get smaller, the beneft will

Obviously, the actual price of LSFO on 1 January 2020 is not yet remain, and those using HSFO will continue to save money.

known, but commentators have estimated that it will cost between Moreover, HFSO is going to be available for quite some time. 10 Maritime Logistics Professional September/October 2019 | |