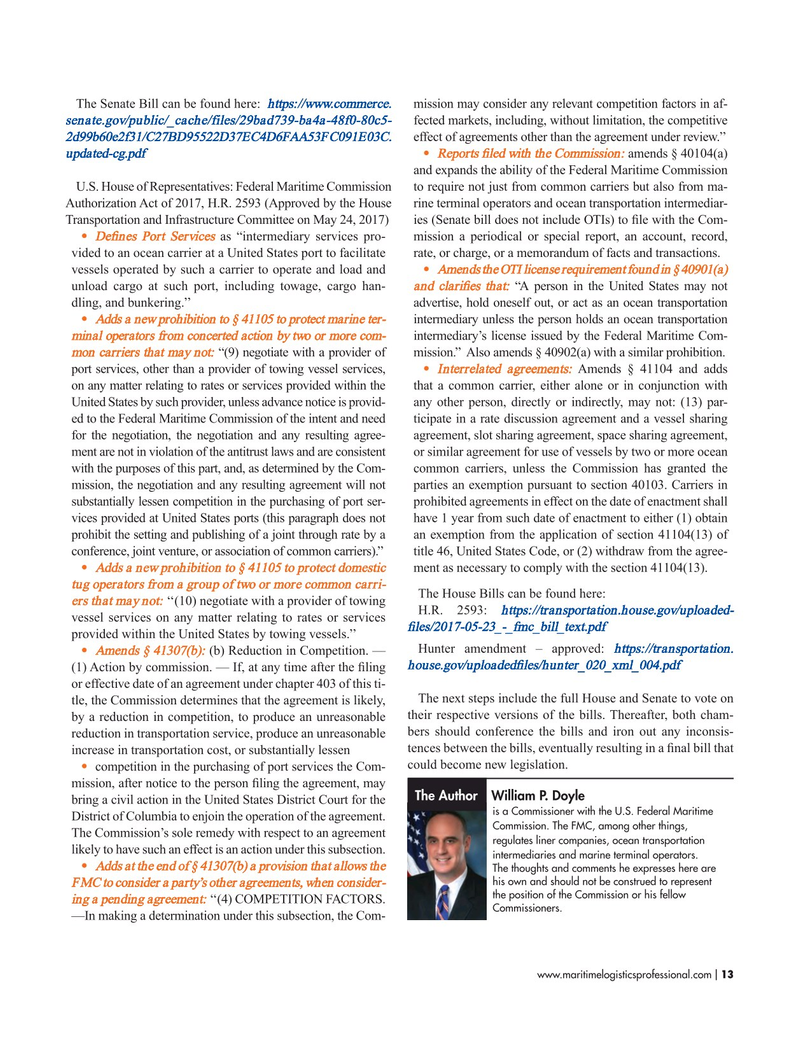 The Senate Bill can be found here: https://www.commerce. mission may consider any relevant competition factors in af- senate.gov/public/_cache/files/29bad739-ba4a-48f0-80c5- fected markets, including, without limitation, the competitive 2d99b60e2f31/C27BD95522D37EC4D6FAA53FC091E03C. effect of agreements other than the agreement under review.’’ updated-cg.pdf • Reports fled with the Commission: amends § 40104(a) and expands the ability of the Federal Maritime Commission

U.S. House of Representatives: Federal Maritime Commission to require not just from common carriers but also from ma-

Transportation and Infrastructure Committee on May 24, 2017) ies (Senate bill does not include OTIs) to fle with the Com- • Defnes Port Services as “intermediary services pro- mission a periodical or special report, an account, record, vided to an ocean carrier at a United States port to facilitate rate, or charge, or a memorandum of facts and transactions.

vessels operated by such a carrier to operate and load and • Amends the OTI license requirement found in § 40901(a) unload cargo at such port, including towage, cargo han- and clarifes that: “A person in the United States may not dling, and bunkering.’’ advertise, hold oneself out, or act as an ocean transportation • Adds a new prohibition to § 41105 to protect marine ter- intermediary unless the person holds an ocean transportation minal operators from concerted action by two or more com- intermediary’s license issued by the Federal Maritime Com- mon carriers that may not: “(9) negotiate with a provider of mission.” Also amends § 40902(a) with a similar prohibition.

port services, other than a provider of towing vessel services, • Interrelated agreements: Amends § 41104 and adds on any matter relating to rates or services provided within the that a common carrier, either alone or in conjunction with

United States by such provider, unless advance notice is provid- any other person, directly or indirectly, may not: (13) par- ed to the Federal Maritime Commission of the intent and need ticipate in a rate discussion agreement and a vessel sharing for the negotiation, the negotiation and any resulting agree- agreement, slot sharing agreement, space sharing agreement, ment are not in violation of the antitrust laws and are consistent or similar agreement for use of vessels by two or more ocean with the purposes of this part, and, as determined by the Com- common carriers, unless the Commission has granted the mission, the negotiation and any resulting agreement will not parties an exemption pursuant to section 40103. Carriers in substantially lessen competition in the purchasing of port ser- prohibited agreements in effect on the date of enactment shall vices provided at United States ports (this paragraph does not have 1 year from such date of enactment to either (1) obtain prohibit the setting and publishing of a joint through rate by a an exemption from the application of section 41104(13) of conference, joint venture, or association of common carriers).” title 46, United States Code, or (2) withdraw from the agree- • Adds a new prohibition to § 41105 to protect domestic ment as necessary to comply with the section 41104(13).

tug operators from a group of two or more common carri-

The House Bills can be found here: ers that may not: ‘‘(10) negotiate with a provider of towing

H.R. 2593: https://transportation.house.gov/uploaded- vessel services on any matter relating to rates or services fles/2017-05-23_-_fmc_bill_text.pdf provided within the United States by towing vessels.’’

The next steps include the full House and Senate to vote on tle, the Commission determines that the agreement is likely, their respective versions of the bills. Thereafter, both cham- by a reduction in competition, to produce an unreasonable bers should conference the bills and iron out any inconsis- reduction in transportation service, produce an unreasonable tences between the bills, eventually resulting in a fnal bill that increase in transportation cost, or substantially lessen could become new legislation. • competition in the purchasing of port services the Com- mission, after notice to the person fling the agreement, may

The Author William P. Doyle bring a civil action in the United States District Court for the is a Commissioner with the U.S. Federal Maritime

District of Columbia to enjoin the operation of the agreement.

Commission. The FMC, among other things,

The Commission’s sole remedy with respect to an agreement regulates liner companies, ocean transportation likely to have such an effect is an action under this subsection.

intermediaries and marine terminal operators. • Adds at the end of § 41307(b) a provision that allows the

FMC to consider a party’s other agreements, when consider- the position of the Commission or his fellow ing a pending agreement: ‘‘(4) COMPETITION FACTORS.

—In making a determination under this subsection, the Com- www.maritimelogisticsprofessional.com 13