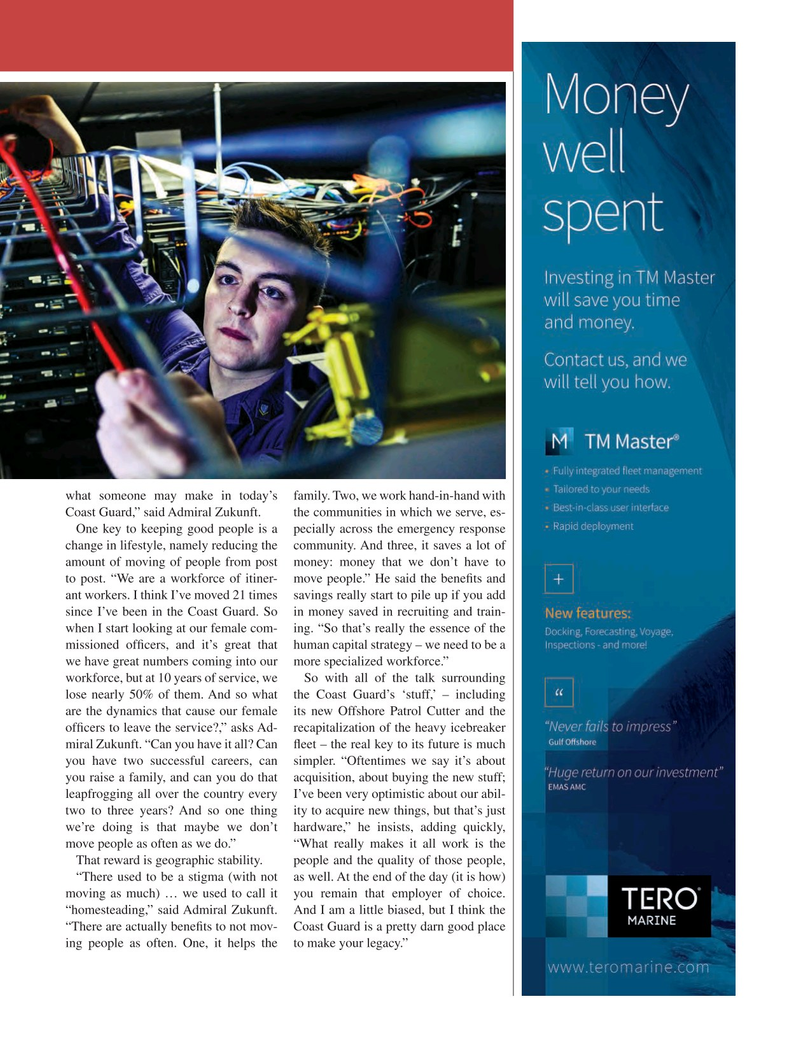 what someone may make in today’s family. Two, we work hand-in-hand with

Coast Guard,” said Admiral Zukunft. the communities in which we serve, es-

One key to keeping good people is a pecially across the emergency response change in lifestyle, namely reducing the community. And three, it saves a lot of amount of moving of people from post money: money that we don’t have to to post. “We are a workforce of itiner- move people.” He said the bene? ts and ant workers. I think I’ve moved 21 times savings really start to pile up if you add since I’ve been in the Coast Guard. So in money saved in recruiting and train- when I start looking at our female com- ing. “So that’s really the essence of the missioned of? cers, and it’s great that human capital strategy – we need to be a we have great numbers coming into our more specialized workforce.” workforce, but at 10 years of service, we So with all of the talk surrounding lose nearly 50% of them. And so what the Coast Guard’s ‘stuff,’ – including are the dynamics that cause our female its new Offshore Patrol Cutter and the of? cers to leave the service?,” asks Ad- recapitalization of the heavy icebreaker miral Zukunft. “Can you have it all? Can ? eet – the real key to its future is much you have two successful careers, can simpler. “Oftentimes we say it’s about you raise a family, and can you do that acquisition, about buying the new stuff; leapfrogging all over the country every I’ve been very optimistic about our abil- two to three years? And so one thing ity to acquire new things, but that’s just we’re doing is that maybe we don’t hardware,” he insists, adding quickly, move people as often as we do.” “What really makes it all work is the

That reward is geographic stability. people and the quality of those people, “There used to be a stigma (with not as well. At the end of the day (it is how) moving as much) … we used to call it you remain that employer of choice. “homesteading,” said Admiral Zukunft. And I am a little biased, but I think the “There are actually bene? ts to not mov- Coast Guard is a pretty darn good place ing people as often. One, it helps the to make your legacy.”