The Global Oil & Gas Workforce Survey, recently released by Oilcareers.com, outlines expectations for hires and pay rates in the oil and gas industry and emphasizes that heightened safety concerns, economic instability and a strong oil price, along with the ongoing skills shortage – particularly in the LNG and subsea sectors – will continue the trend for oil related salaries to push upwards. 170,000 + oil and gas professionals were invited to participate of which, 15,500+ were either direct recruiters or senior decision makers and the results of the survey represent responses from over 50 countries in seven major oil and gas producing regions.
For starters, employers weighed in on expectations for salaries, pay rates and hiring projection. (SEE CHART 1)
Because, according to Oilcareer.com’s Managing Director, Mark Guest, Oil & Gas employment tends to be a leading indicator of oil & gas activity, CHART 1 is useful barometer. Conversely, he said, vacancy numbers tend to lag behind a downturn. It turns out that employers like to hold onto talent for as long as is possible, because good help is hard to find. Many employers will wait until the last possible second to furlough better employees in the hope that things will turn around. The mood for most firms was good, judging from the responses received for the survey. For example, some of the stronger regions for hiring and salaries include the United States, Canada and the UK. In Australia, hiring prospects and opportunities are up, says Guest, but are also hindered by strong labor laws that keep aliens out and high cost of local labor (putting some projects at risk). For the United States, almost 42% of respondents thought that hiring would increase and almost 60% predicted that salaries would increase.
(SEE CHART 2)
The relatively favorable employment situation at moment has its downsides. Some employers can’t get enough people with the right skills, and consequently, providing better and more training remains a key requirement. The shortfall – the gap between market needs and available talent – is hard to quantify. (SEE CHART 3)
Mark Guest explains, “A lot of ‘best skills’ people are retiring. Energy HR executives refer to this as the “Big Crew Change.” And because industry hasn’t brought along enough talent, a skills gap is emerging. A generational issue is emerging and it is becoming increasingly important to ‘upscale’ existing young talent to step into the shoes of retiring senior professionals.” In the UK, however, military cuts are bringing an unexpected source of good personnel to the industry. Indeed, some companies have specific programs which foster a fast track training regime in order to bring these people more quickly into the world of energy. Guest adds, “They have good discipline, understand lines of communication and are technically well trained.” But, according to the survey respondents and as depicted below, the biggest issues for the oil & gas employment picture include lack of skilled engineers, the uncertainty about the current economic instability and the lack of adequate training budgets at some firms.
Although the latest survey was conducted prior to the recent violence and crisis in Algeria, the question of security for energy employees and whether it is harder to recruit talent in high risk areas presents a two-part answer. Offshore, security tends to be quite good in high risk areas and the weather is better, so many offshore professionals prefer the better weather of Africa (despite the elevated risks) to the rough North Sea or hurricane season in the Gulf of Mexico. On the other hand, onshore installations – witness Algeria – present their own challenges. That said; conditions and security in places like Nigeria are far better than one might believe, outside looking in. According to Guest, security doesn’t tend to be a major deterrent for attracting employees to high risk theatres.
Globally, demand for good oil & gas personnel is up. And, the American play – especially in terms of LNG exports – is still one big “IF.” That said; and even if the US should wean itself from foreign suppliers, those players would likely just find other receivers who want energy just as bad in a world where demand is increasing. Mark Guest adds, “In terms of employment and these multi-national companies, Energy is the most mobile industry in the world. And the U.S. and the U.K. – Houston and Aberdeen – continue to export skills, applying this knowledge all over the world.” For this reason, Guest doubted that even an energy independent America would change the multi-national nature of oil and gas personnel and knowledge that flows from U.S. shores.
Finally, employers need to stress that there is a long future in energy. Even with alternative energy coming, it is still a long way off and there are plenty of reserves out there. In the UK in particular, an effort to bring in energy employees – mirroring the US effort to bring maritime awareness to the high school level – is extending all the way down to elementary education. The need to portray the industry as an attractive career choice is important but the real key to solving today’s energy employment picture will revolve around balancing safety with skills, with adequate numbers of personnel with the right skills. Download the latest report by clicking:
http://oilcareers.com/content/downloads/blogs/workforce_survey_h1_2013.pdf

(As published in the 2Q edition of Maritime Professional - www.maritimeprofessional.com) 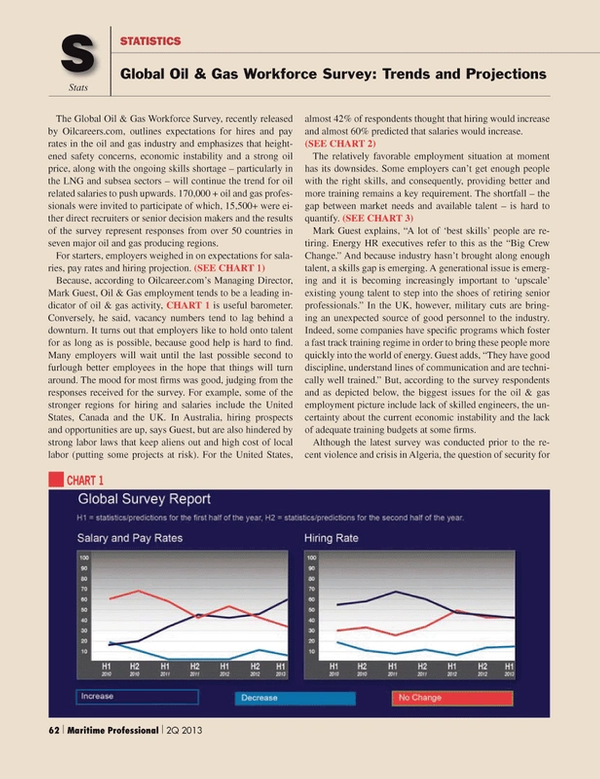