Technology that has helped to achieve world firsts in ocean exploration broadcasting could also provide the answer for covert operations in the defense realm, where communications need to go unheard.

Traditionally, wireless subsea communications use acoustic signals. Sound is practical, because it travels further through water than electromagnetic waves. Using sound, information can be shared over many km. Unfortunately, it is also relatively easy to hear those sounds and target the source using passive sensors; including when beyond the actual range at which the signals are effective. For several years, a new technology has been developed which enables significant data rates of up to 10Mbps over distances spanning up to 150m, using free space optics to modulate signals. As the effective communication range is shorter, the effective detection rate is shorter too – listening in isn’t so easy.

Acoustics communications
The use of acoustics is prevalent when communicating wirelessly underwater and it is likely to remain so. The physics of how sound propagates in water are well understood. Instruments to both communicate with and track other acoustic beacons are common. In fact, low and medium frequency acoustic systems can be used to communicate effectively subsea over vast ranges. Sonardyne recently demonstrated data rates of up to 3000bps over an 11km range. However, the same reasons which make sound such an effective means for carrying data through the water also make it susceptible to interference and detection. Sound signals can be interfered with by simply sending other sound signals at the same frequency at the same time. Simply increase the amplitude of your interference and it becomes difficult for the receiver to make out the signal of interest. Targeting the source of the sound is simple trigonometry. To listen into the messages is not so simple, as the way the data is modulated, and perhaps compressed, needs to be understood. Still, the use of sound can put the user in a compromising position. The result has been that, when covertness is a prime requirement for a subsea mission, communications have not been an option. 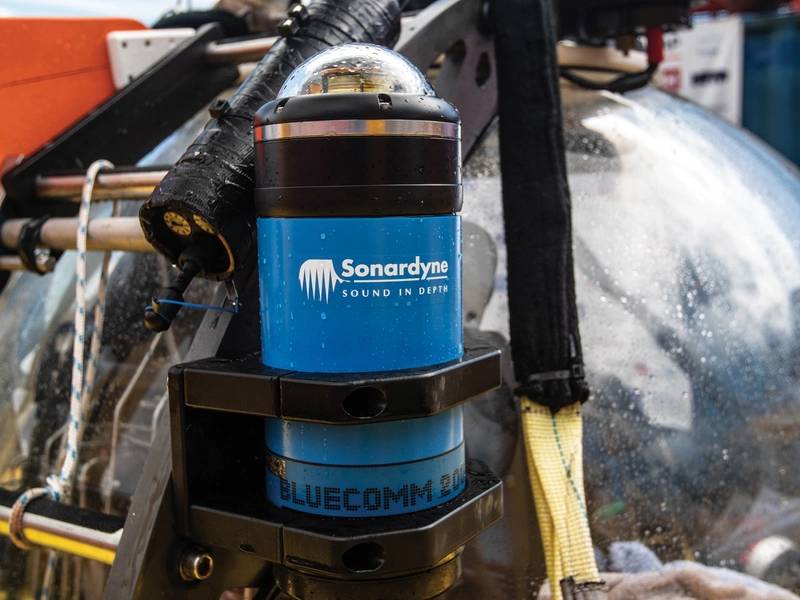 One of Sonarydne’s BlueComm units attached to one of the Nekton mission submersibles.  Photo: Nekton Oxford Deep Ocean Research Institute

Free space optical modems
Electromagnetic waves have not been successful subsea as they attenuate rapidly and their effective communication ranges are, in relative terms, very short. This situation has been changing as new free space optical modems have been pushing the ranges and how much data can be transmitted further.

Sonardyne’s BlueComm 200 is a good example. It uses visible blue light because at that wavelength (450nm) light travels furthest through water. Most blue light can travel as far as 150m and it is not uncommon to detect small amounts of blue light emitted by the sun even as deep as 300 to even 1,000m depth, beyond the euphotic zone! Using blue light, we can transfer a lot more data than it is possible by using acoustics. BlueComm 200 can sustain data rates of up to 10Mpbs. That is enough to transfer HD video in real time. BlueComm 200 modems have been of real interest in support of resident subsea autonomous underwater vehicle (AUV) programmes in deep waters – where we can manoeuvre an AUV around a hemispherical shape with a 150m maximum range! That’s a lot of distance.

In shallow waters, their use is limited by interference from sunlight (which as we have seen can make its way down to even 1,000m depth). Interference from other light sources limits the modem’s effective range. Free space optical modems are also not that covert, they operate in the visible light spectrum and are therefore visible to the naked eye.

Ultraviolet
We set out to address the challenge of interference first. If we were to operate outside the visible light spectrum, to avoid interference from artificial lights, which wavelength would be the best choice? A centre wavelength of 405nm was a good compromise containing ultraviolet (UV) and some visible violet light, the BlueComm 200 UV was born. The concession we had to make was range. It has been effectively halved, to up to 75m. In exchange we gained two benefits. First, we wouldn’t suffer from artificial light contamination. This means we could operate concurrently while filming video or in the presence of other light sources. Second, we would be able to operate closer to the surface and suffer less interference from sunlight. This is because UV light emitted by the sun is not as effective as blue light when travelling through water. Meanwhile, we maintained an update rate of up to 10Mpbs. And, when you take a step back, a shape almost resembling a hemisphere with 75m maximum range in which you can operate and sustain up to 10Mbps is significant in size and able to support a wide number of concepts of operations. One of which is covert communications. 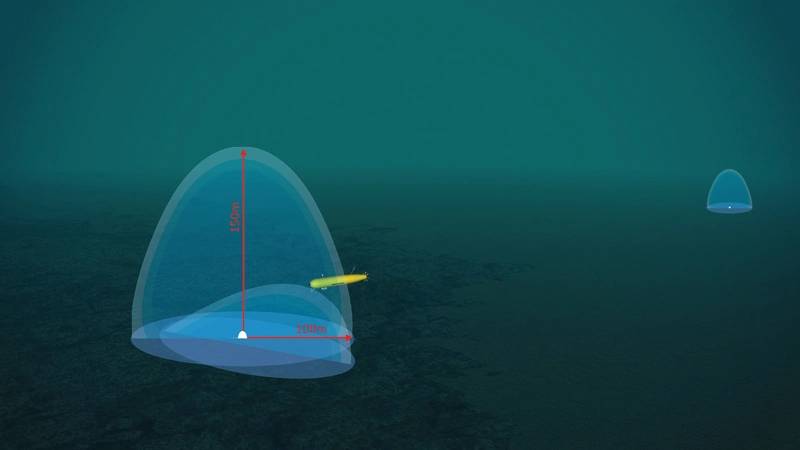 BlueComm 200 UV could be used to support covert AUV communications at relevant outposts along the seabed.  Photo: SonardyneCovert communications
As a BlueComm 200 UV can propagate up to 75m, this means that, when operating in depths below just 75m, we can communicate and remain unseen by anyone observing from the sea’s surface. In fact, for someone to be within 75m range of our BlueComm 200 UV in the first place, it would be highly likely that they would be acting on intelligence, i.e. that someone would only be within range because it knows where to find us in the first place. Even when operating closer to the surface, the limited range of the BlueComm 200 UV, when seen from space, is very much like a needle in a haystack. This means we can now communicate subsea and remain covert. This is great news for a new generation of submariners and new unmanned underwater vehicle (UUV) concepts.

Unmanned vehicles as a force multiplier for submarines are not a new idea. In 1997, the National Research Council published Volume 6 of the “Technology for the United States Navy and Marine Corps, 2000-2035”. In this document, the authors detail how AUV/UUV systems will be used in support of operations and cite secure communication links as a requirement to make this vision happen. BlueComm 200 UV can provide this link, securely and covertly.

With BlueComm 200 UV, extra-large unmanned underwater vehicle (XLUUV) platforms will be able to operate and communicate with other vehicles or with ground stations at choke points, helping to monitor, detect and prevent incursions from foreign agents, all while remaining covert.

Practical examples
It’s not all about covertness, recently we achieved quite the opposite. The technology was out in the field, being used to achieve a world first. Working with the Nekton Foundation: Associated Press and then Sky News achieved live transmission from a manned submersible wirelessly to a vessel and then on to millions of homes using our free space optical modem. Nekton Foundation was set up to help change our knowledge and understanding of the world’s oceans and to speed up the protection and governance of this last great wilderness, the deep ocean. Their First Descent initiative involved a series of expeditions, using two manned submersibles, in the Indian Ocean to help explore and conserve one of our least protected spaces. 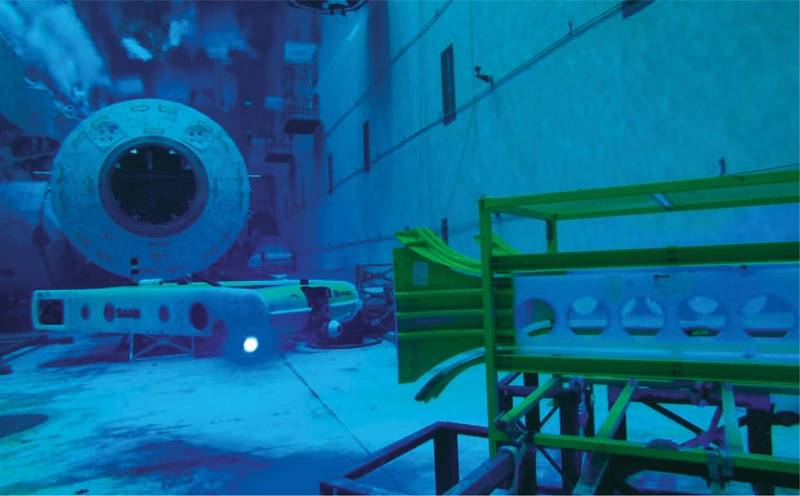 In this mission, they set up a depressor (a cabled receiver from a surface vessel) with a BlueComm 200 UV on one submersible and, on other, a BlueComm 200 that was working with a prototype green light wavelength in order to keep sufficient separation in the wavelengths to limit interference between each unit and the depressor. The depressor was submerged to 90m depth and was used to communicate wirelessly with the two manned submersibles using the BlueComms. With this arrangement, Sky News presenter Anna Botting was able to film herself inside one of the manned submersibles, using high definition video, and transmit that data live to millions of homes around the planet with little, or no interference from the sun. The building blocks to support covert operations are ready and proven. 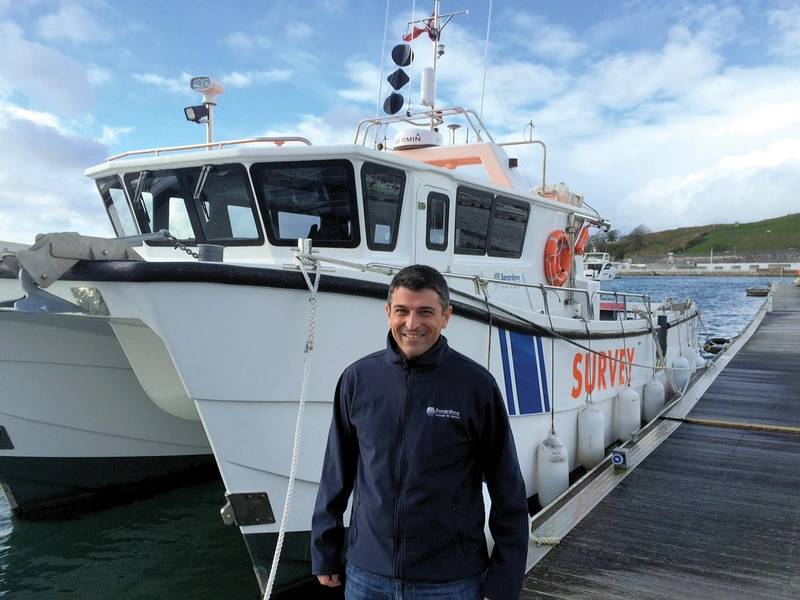 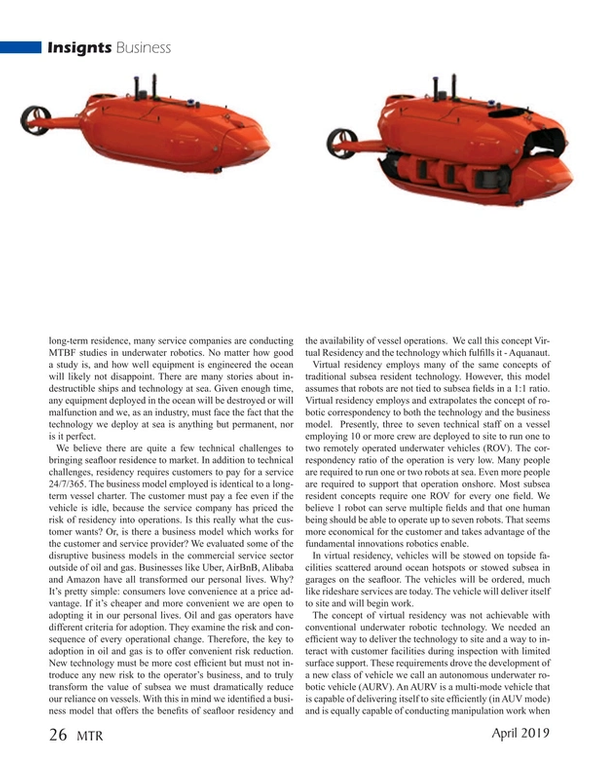 Other stories from April 2019 issue