A retractable sonar system has been specially designed by underwater engineering services company Subsea Fenix to set atop a Saab Seaeye Falcon ROV.  Nicknamed ‘The Grasshopper.’ the concept has made possible a more detailed inspection of a reservoir dam in central Italy than could otherwise be achieved. Faced with the problem of mounting a BlueView 3D Sonar system high enough above the ROV to gather all-round images and avoid the vehicle’s chassis obstructing the scan, Subsea Fenix knew it would be impossible to swim any distance top-loaded in this way. The solution was to create a retractable structure that lowers the topside mass while the Falcon is swimming, then remotely raises it when needed.
With a full inspection package aboard the ROV it has been possible to provide accurate visual 2D and 3D sonar data of inlets and outlets, grids, tunnels and ramps, while also identifying the presence of debris and sediment.
The clarity of both the high-resolution cameras and advanced sonar has given the inspection team a clear and accurate view of the condition of the dam and its operational components.
The Falcon helped uncover critical problems such as rock fall damage to the rail used to lower the massive outflow closure gate, and rock debris blocking the cable wheels that lower the gate. Scans also revealed that a third of the grids clearing the water flow were obstructed by sediment.
Divers were used for much of the remedial work with the Falcon in support. The 2D sonar aboard the ROV was used to view the underwater horizon and monitor diver activity, while at the same time observing crane movement of a dredging pump. In addition to the top-mounted BlueView sonar system, the total inspection package for the Subsea Fenix Falcon includes a Tritech Super Seaprince scanning sonar, a high-resolution color video camera with 180-degree tilt platform and low-light mono camera.
The Falcon’s control architecture makes it easy to add and change such systems as needed.
Although small enough to be manhandled, even from a small boat, its five powerful thrusters make the Falcon highly maneuverable and able to hold steady in moving water while filming or undertaking various missions. Subsea Fenix’s future plans include using the Falcon at the same Lake for a deep tunnel inspection to an interconnected lake.

(As published in the MAY 2015 edition of Marine Technology Reporter - http://www.marinetechnologynews.com/Magazine) 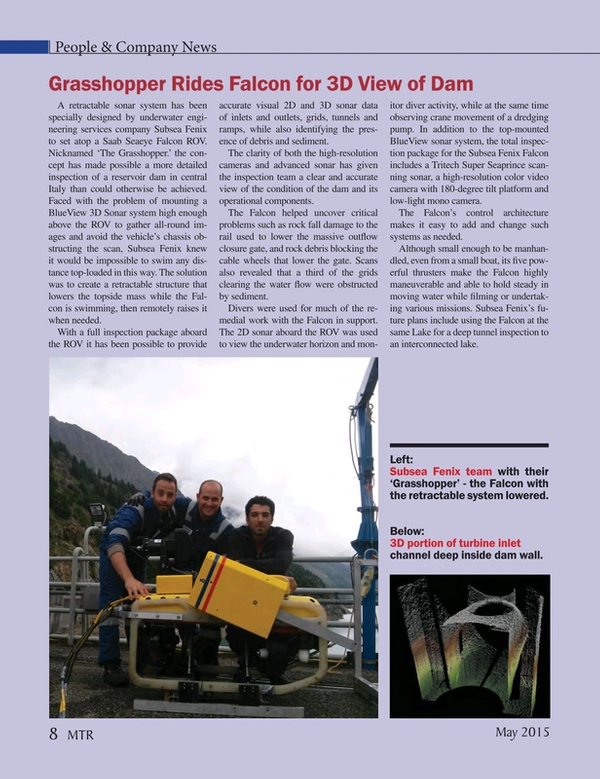 Read Grasshopper Rides Falcon for 3D View of Dam in Pdf, Flash or Html5 edition of May 2015 Marine Technology

Other stories from May 2015 issue