Delegates from the French Research Institute for Exploration of the Sea (Ifremer) visited the Kongsberg Maritime Subsea headquarters in Horten, Norway late December 2013 for the Factory Acceptance Test of its second Simrad ME70 scientific multibeam echosounder. Ifremer acquired the multibeam echo sounder – the Simrad ME70 delivered as part of the mid-life refit of the L’Europe Research Vessel – to strengthen its work in the Mediterranean Sea. Sea trials on the refit vessel are planned for March 2014.
The delivery completes the already installed Simrad EK60 scientific single beam echosounder system to create a standardized package that combines quantitative single beam and multibeam systems for vessels that carry out biological surveys. Ifremer has also chosen the ME70 bathymetric module, enabling the ME70 to perform seabed mapping according to international standards while at the same time doing ecosystem surveys of the water column.
The Simrad ME70 has a built in calibration functionality in the software, made possible because the ME70 utilizes split beams in all beams. A calibration sphere with known target strength is used to calibrate the entire system, allowing the user to obtain absolute backscatter values from ecosystem components such as plankton, fish or bottom habitat. Calibrated backscatter data are also relevant for bottom classification, as backscatter levels can be compared on the same scale.
Also the Simrad ME70 offers its fully populated element array in both alongship and athwartship direction. A total of 800 individual elements in the transducer are used to form up to 45 split beams spread out in a fan in the athwartship direction. As individual beams are formed in both transmission and reception, two way side lobe suppression give side lobe levels lower than -35 dB. Coupled with Frequency Rotated Directional Transmission (FRDT), where operating frequency is shifted between the beams to avoid interleakage, the ME70 is designed to allow the user to measure weak targets close to strong ones, which is essential when your goal is to map the entire marine ecosystem.
“The ME70 has added another dimension to our biological surveys on board the R/V Thalassa as it addresses some of the physical shortcomings of quantitative single beam echo sounders such as low resolution and sampling volume. It has been many years since we started using the ME70 on Thalassa, but we have now come to a point where we standardize the combination of quantitative multibeam and multifrequency single beam systems on board our vessels that carry out biological survey and research,” adds Laurent Berger, fishery acoustician at Ifremer. 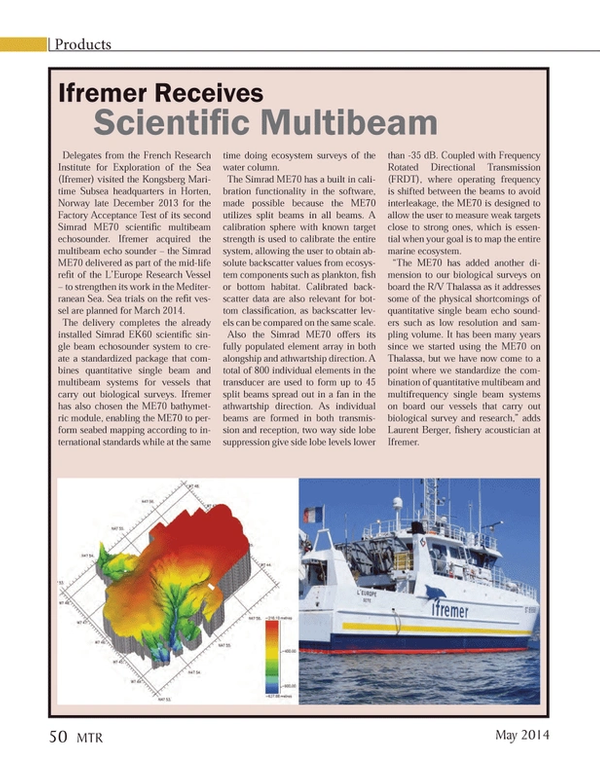