AGOR 27 Comes to Life as the R/V Neil Armstrong

On March 29, the Ocean Class Auxiliary General Oceanographic Research (AGOR) vessel hull number 27 started its official life as the R/V Neil Armstrong, the first research vessel named after a space explorer.  Carol Armstrong, the widow of the famed astronaut, performed the christening duties during a brief sunbreak on a windy and rainy Pacific Northwest afternoon.
The number of illustrious speakers highlighted the rich diversity of agencies involved in the design, construction and operation of the vessel. Dick Nelson, President of Dakota Creek Industries (DCI), the construction shipyard, spoke first followed by Chris Chuhran, VP of Guido Perla and Associates, Inc.  (GPA), the Seattle-based Naval Architecture and Marine Engineering firm that partnered with DCI for the design and build project. Chuhran said even though the keel was laid in June 2012, the entire process had actually taken several years from its earliest idea phase to today’s ceremony.  The final detail design evolved over many months with frequent reviews by NAVSEA, the Office of Naval Research (ONR), the National Science Foundation (NSF) and the University National Oceanographic Laboratory System (UNOLS). On several occasions, DCI hosted review meetings attended by more than 40 people.
Rear Admiral Jonathan White, USN, said the R/V Neil Armstrong would help the Navy and the United States “…know the ocean better than anyone else,” much like Armstrong’s trip to the moon helped us know the lunar world.
Chief of Naval Research, Rear Admiral Mathew Klunder, declared it a “magnificent vessel” that was “made and designed for the future.”
Dr. Susan Avery, President and Director of Woods Hole Oceanographic Institution (WHOI) assured Mrs. Armstrong that her “husband’s legacy lives on in his namesake ship.”  She described the ship as a “high-tech marvel” that is expected to perform its 40-year mission with distinction.  The R/V Neil Armstrong will replace the R/V Knorr, in service since 1968, one year before Armstrong’s walk on the moon.  The R/V Knorr, AGOR-15, is retiring after logging over one million miles in service to the Navy and WHOI.
Guests at DCI’s Transit Shed ceremony had only a short time to admire the sleek lines of the ship before tugs, taking advantage of the high tide, moved her back to the shipyard for completion of the interior systems.  Commissioning and finish work should be completed by August, followed by sea trials, after which the ship will then spend an additional six months in the Puget Sound area training the crews and adjusting the equipment before she heads for her new home port at WHOI in Massachusetts.
Initial vessel construction for the two-ship, $145-million-dollar project is funded by NAVSEA who will retain ownership of the vessel.  Scientists from WHOI and around the world will be the primary users conducting year-round research in the North Atlantic and Arctic Oceans.  WHOI will contribute $350,000 a year for maintenance and operation of the vessel.
Dr. Avery praised the modern design and ample computer lab space available on the R/V Neil Armstrong allowing scientists to analyze collected data in real time.  She explained that the National Science Foundation (NSF) handles the complicated process of coordinating and scheduling research time on the ship.  Pre-vetted, endorsed, and funded projects are scheduled based on multiple factors; minimizing transit time, maximizing science time, matching and timing schedules, and the number of days needed onboard.  “Scheduling ship time in an integrated, inter-disciplinary way is a big planning effort,” said Dr. Avery.   Research will include mapping of the seafloor, launching of buoys, ROVs and other equipment, studying how currents affect acoustic signatures, microbial content of the northern waters, discovering how climate change and sea level rise are impacting the North Atlantic, and how the ocean in turn impacts climate changes.  The focus will be on the entire ecosystem.  The physics, biology and chemistry of the high latitude oceans will fall within the Neil Armstrong’s mission area.

Design Team
GPA was hired by DCI to provide a Basic Design during the Phase I NAVSEA design competition.   When the team’s design was awarded the build contract in October 2011, GPA’s engineers and Naval Architects went to work on the detail design and production engineering.  GPA collaborated with Siemens Marine for the propulsion and automation systems.  Siemens will be designing, engineering and commissioning the diesel electric and automation system.
GPA and DCI have partnered on projects in the past ranging from a Navy Sea Jet, an Advanced Electric Ship Demonstrator, to fire boats, ferries, tugs and trawlers.  Both companies have worked on multiple Navy projects independently as well.

Shipyard
Dakota Creek Industries (DCI), located in Anacortes, Washington since 1975, began construction on AGOR 27 in mid-2012.  The Navy exercised its option for a second vessel in February 2012, and the shipyard began shifting its workload around to fit the second vessel into the schedule.  Hollie Anthonysz, DCI Program Manager of vessel construction, said the shipyard’s first experience as the sole source on a military ship was positive and they are looking forward to the launch of the second ship.
DCI is a Puget Sound shipbuilding and repair facility specializing in steel and aluminum vessels up to 450 ft. and 275 tons.  Located in the deep waters of the Guemes channel, it offers a protected harbor with easy access to Pacific waters. Its facility includes a Syncrolift ship lift and a dry dock.

Design Specifications
The vessels were designed for global operations in support of national security interests in the marine field, and other national oceanographic scientific endeavors.  The ships are 238 ft in length overall, have a sustained speed of 12 knotts, can stay at sea for a minimum of 40 days, and travel over 11,000 nautical miles without refueling.  In addition, they have the most modern scientific laboratory facilities and workshops afloat, high-tech computer and oceanographic equipment, and hotel facilities to support 24 scientists and a crew of 20.    They are built to ABS Under 90 Meter rules, and will be certified as A1, Circle E, AMS, ACCU, NIBS, Ice Class D0 and UWILD.  The design is also compliant with 46CFR Subchapter U (Oceanographic Vessels).
Working deck space is a premium in oceanographic work.  The AGOR vessels have 2,557 sq. ft. of clear deck space with 1,873 sq ft of that space on the open aft deck. Design specifications included being fully operational in Sea State 4 and able to handle dynamic positioning relative to a fixed position in Sea State 5 with a 35-knot wind and 2-knot current.
Additionally, the ship had to be as operationally quiet as possible.  A great deal of ocean research involves listening.  Excessive ship noise would negate that effort.  GPA’s unique hull design meets the Bubble Sweepdown performance requirement of the original specifications by diverting bubbles away from the sensitive sonar area.  Model tank tests performed in Poland confirmed the Phase 1 design efforts met the Navy’s exacting standards. Completing the noise dampening goal, designers chose systems, defined equipment locations and designed special installation methods with acoustics as a priority.

Equipment
DCI has teamed with a multitude of local, national and international vendors to outfit the ship with the best equipment available, meeting the various needs and requirements of the scientists for a quiet, efficient, fully integrated and highly resilient blue-water platform from which they can perform their experiments and studies.
Over the next two months, Siemens will be installing their new Blue system.  This advanced, multi-drive, low-voltage system manages the speed of various AC propulsion motors controlling the propellers, stern thruster and bow thruster.  The system provides enhanced reliability with multiple failsafe features, lower maintenance costs, increased efficiency, and increased operational ease for the crew.  Reduced fuel consumption results in lower greenhouse gas emissions.  Siemens is also supplying the majority of the electrical switchgear, the ACCU automation, and condition-based monitoring system.
The vessel uses four vibration-isolated Cummins QSK38-DM main generators providing a maximum of 3952 kW integrated electric power for all functions of the ship, including propulsion.  The integrated diesel-electric plant allows for multiple generator configurations, ensuring the diesel engines operate at peak efficiency at all times.
A unique feature of the electric propulsion will be a “combinator” style control function integrating management of motor speed and propeller pitch on the Hundested-supplied Controllable Pitch Propellers.
Although fairly common in controllable pitch systems with direct drive diesels, use of the combinator control is unusual in variable-speed electric drive systems.  The combinator increases operational flexibility by allowing the operator to set the propeller at its most efficient setting across a range of operations including heavy towing and cruising.
Design specifications were stringent for deck cranes and winches.  They needed the capacity to load equipment weighing more than 20,000 pounds including the deployment of ROVs, buoys and other heavy equipment.  The stern frame required a minimum of 12-foot inboard and outboard reach.  As designed, the frame  provides 15 feet of clearance above the deck and 27 feet of clear space between the block attachment points, all while maintaining a Dynamic Safe Working Load of 30,000 pounds through the full range of motion.  Allied Marine supplied the stern frame along with the portable TK4-30 portable crane and the TK 70-70 aft-deck Main Crane.  They also supplied the Motion Compensated CTD Handling System and the Starboard Side Handling Device, both of which extend to the waterline for improved safety and load control.
Seattle based Markey Machinery supplied two electric-motor driven CAST-6-125 Hydrographic Winches, and the DETW-9-11 Traction Winch, both with AC Variable Frequency Drives System and electric motors for precise control.
Kongsberg Maritime, a 200-year-old Norwegian company, produces a full line of specialty SONARS used in scientific research, fisheries, and oil exploration.  For Phase III of the project, Kongsberg will supply advanced SONAR systems.  Although specifics are not confirmed at this time, projected equipment includes deep water and mid-water Multi-beam units, a HiPAP Gantry with a Sonardyne single beam survey system, and a SONAR Synchronization System.   A Sub-bottom Profiler SONAR is expected as well.  Additional equipment plans include a Transducer Array, a Mid-water Echo Sounder, and three Current Profilers operating at different frequencies, all are scheduled for installation in Phase III, subject to change as the project progresses.
AGOR 28, the second vessel in the Armstrong Class, will be named R/V Sally Ride in honor of the first female astronaut and the youngest person to go into space.  The R/V Sally Ride will be operated by Scripps Institution of Oceanography, University of California, San Diego, where Ms. Ride was a faculty member before becoming an astronaut.   The second vessel will mirror the basic ship equipment with some variations in the scientific outfitting.  The christening date for the Sally Ride is scheduled for later this summer. 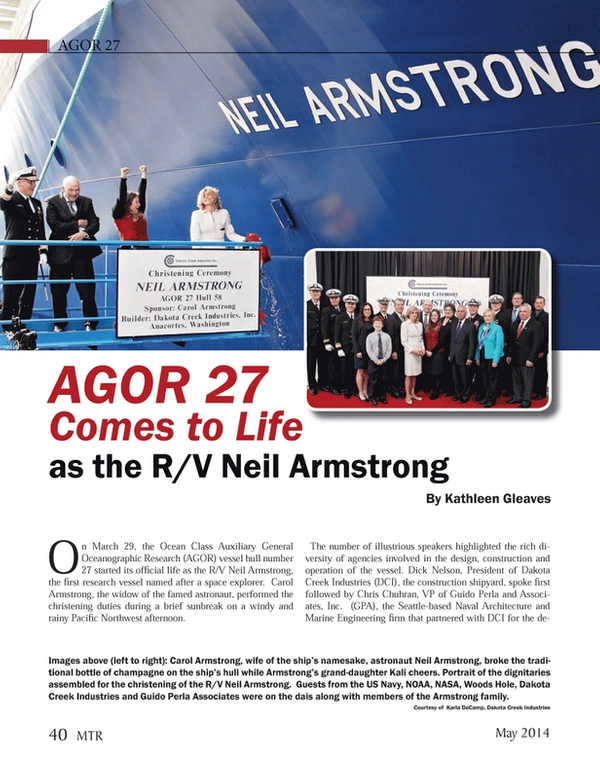 Read AGOR 27 Comes to Life as the R/V Neil Armstrong in Pdf, Flash or Html5 edition of May 2014 Marine Technology