It started as a basic, grassroots, two-man operation by two friends with an ear for music and a passion for diving. Today, after 43 years of hard work, determination and innovation, Dominion Diving Ltd., based on the Dartmouth side of Halifax Harbor, is the largest provider of diving and marine services in Canada, said CEO Robin Lohnes.
Robin’s father Barry Lohnes and his business partner Jim Ritcy, members of a 1960’s band, initially struck out with their subsea enterprise in 1969 after Ritcy introduced the senior Lohnes to diving. It was not an instant success.
They struggled in the early years and thus maintained other occupations, even working for another diving company until they got a much needed foothold in the business.
“They got word of a wreck that was located off Sable Island,” said Robin, now 37, a fixture in the company since he was 15. “It was a liberty ship from the Second World War. It was laden with brass and other cargo. They purchased a small wooden boat, about 40-ft. long, took it to Sable Island and pulled up some brass by hand. They made a few of those trips.”
Their old wooden boat subsequently sank, leading to the acquisition of a larger 65-ft. wooden vessel equipped with a crane.
“So they went back out, and every summer they would work out there, salvaging the brass and cargo. Their methods got more refined, and then they started locating more wrecks up and down the coast, salvaging propellers, shafts and that sort of thing,” Robin said.
It was a total salvage operation until the company could acquire the capital to invest in boats and equipment. “They then became more of a presence in the inshore construction and diving industry,” Robin said, noting that his father and Jim were the company’s only employees for the first four or five years.
As the company progressed, offshore exploration activity off the Nova Scotia coast became more intense, and Dominion Diving began to focus more on the sector.
Underwater robotic vehicles, which eliminated restrictions and risk to human divers, were also coming to the market – a technology which Dominion Diving became involved with.
“They stressed themselves quite heavily to get started with the purchase of their first underwater remote operated vehicle (ROV) around 1982. They bought that, and as they continued it blossomed into a real going concern. The company went through a number of different phases,” Robin said.
“We had been using older, traditional diving methods right up until the fixed link (the 12.9 km Confederation Bridge between New Brunswick and Prince Edward Island), and began construction in the ‘90s (1993-97). Around that time, some of the diving regulations were becoming a bit more strict and defined. That’s when we got into hard hat diving (with mounted cameras) and air hose, which was really the real old fashioned way of diving,” Robin said, citing the advantages of unlimited air and communications not afforded in scuba diving.
“The fixed link was a big job. It changed the company. We employed 60 divers there for three years. We had five decompression chambers, and then we built a specialized diving system, a transfer under pressure system with a closed bell to increase bottom time. The depth was 130-to-140 ft. in the center (channel) and we were trying to stay longer on the bottom, so we did that with this special system,” he said.
During this same period, Dominion was heavily involved in the Newfoundland offshore business.
“We were operating 13 ROVs, three were ultra deep vehicles, 2,000 to 3,000 m rated vehicles. And as always, we continued to do a lot of work at (Halifax) shipyards, laying transmission cables, wharf construction, pipelines,” Robin said. “We had a pretty heavy fleet of boats and barges. We did a lot of towing and a lot of crane barge lifting. There were periods where people thought our main presence was in the offshore, but our bread and butter has always been in inshore diving and construction.”
While things were moving along smoothly and in a busy fashion, “changes happened after 2000,” Robin added. “Some larger competitors moved up from the States and disrupted our operations in Newfoundland, quite severely to the point where we had to sell some assets and restructure the company and rethink our strategy.”
In 2002, co-founder Jim Ritcy passed away, subsequently leading to a buyout agreement with the Ritcy estate. Robin became CEO and his brother Matthew, 35, president in 2005.
“Matthew never chose the diving route,” Robin said. “He went down the route of robotics; that’s what he looks after. He is a ROV pilot, a certified hydraulic technician. He looks after all our contractual bidding, pricing structure and still works offshore. I’m on the diving, barge, tugboat side of things. The ROV operation it is a division of the company responsible for 50% of the revenue.”
Robin said that, during the reconstruction, “we went back to our traditional services, inshore construction, diving, tugboat and crane services. We rebuilt the company, acquired some new assets and presently we are operating four ROVs, three work class and one observation vehicle and have about 45 employees. We have six small tug boats and a 90-ft. offshore towing and research vessel. We do a lot of work with BIO (Bedford Institute of Oceanography) and do coastal towing with the larger vessel.”

Innovate to Compete
For Dominion Diving, its diversity in the marine industry has led to new innovation and the company’s involvement in subsea technology.
A 24-hour operation ready to answer industry emergency calls, Dominion needs quick solutions and equipment modifications to meet immediate challenges.
“We are continually developing subsea technology,” Robin said. “We try to minimize our reliance on outside resources. We are not 100% self-sufficient but we have our own certified in-house fabrication shop, and one of the main purposes of that is for underwater tooling for our ROVs. These things are limited in their dexterity, so we make things to make them able to complete tasks. Basically, instead of going to an alternate source, someone who doesn’t own a ROV, and explain to them what we want to design and then go to a fabrication company that is not familiar with diving to build what these other people have designed, well it just doesn’t work. We design and build everything. We have several subsea engineers we utilize,” and staff takes advantage of past experience in determining what will work.
“We develop some of our own electronics to suit us, and we will work with the ID (Innovation in Design) Lab at Dalhousie University (Halifax). We come up with ideas, they refine them, and we work together to produce them. They (the lab workers) are a very interesting bunch to work with because they are nonprofit and have a wealth of ambition, creativity and knowledge. They are smart people,” Robin aid.
One innovative piece of technology designed and built in collaboration with the Dal lab was an underwater video system aimed at resolving problems in maintaining safe storage of gathered data.
Because DVDs and hard drives are susceptible to damage under harsh conditions, Dominion integrated a digital video tape into a video box with several built in features.
“It is quite a complex little box,” said Robin. The previous systems used were quite large, as he motions to nearly the size of the top of his office desk, with two TVs in them. “We shrunk that down. We designed it down to less than quarter the size and we had Dalhousie shrink it again. It now fits inside a 12-in. by 12-in. case. We call it the data vault. Everything is digitally stored, and we get good quality images.”
The data vault is the company’s latest piece of technology. “But we are continually taking various hydraulic rotary and torque tooling and adapting them so the underwater robotic vehicles can use them. It is those simple things it would take engineers outside the company too long to design and we just do on our own,” he said.
With long term plans to become a global offshore player, Robin says one of the biggest challenges will be asset acquisition. “The drilling and exploration are getting deeper and deeper,” he said, referring to upcoming offshore projects off Nova Scotia that will be in water depths of up to 4,000 m. “The equipment that is required to go to those depths is equivalent to what you would use on the Moon, less the rocket. The stuff is complex, the pressures are enormous and the prices extreme.”
Another potential challenge for offshore development has been the discovery of huge amounts of natural gas on the U.S. mainland, gas that could be released through ‘fracking.’
“It has a negative effect. When there is an abundance of anything, the value goes down so there are two things with natural gas; there is an abundance on land and it is cheaper to get it,” Robin explained. “It doesn’t require the gear you need in the ocean to get it. So it affects the value of it, and feasibility of offshore and on land are two different things.”
With an ever-changing industry, Dominion Diving has no thoughts of backing down from the competition.
“The company is very stable, very diversified, very aggressive and unique in our approach to things,” said Robin. “We are always looking for new markets, new methods and some we develop ourselves. We are definitely a force to be reckoned with, even to foreign entities. We will go head to head and quite often have quite good results, and a lot of that I attribute to the personnel we have here. We have world class people.”
For Robin, it all adds up to being in the business “for the long haul.”
“It’s in my blood. I have salt water in my veins,” he said with a smile.

(As published in the March 2013 edition of Marine Technologies - www.seadiscovery.com) 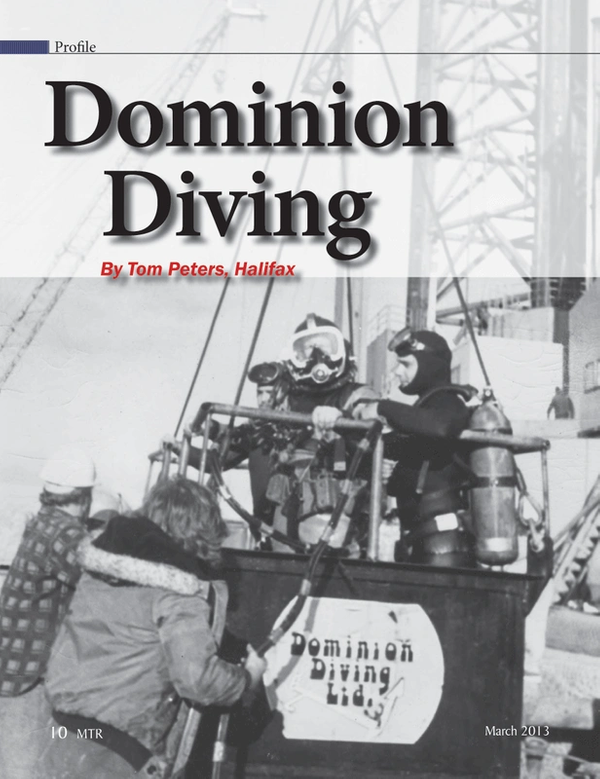