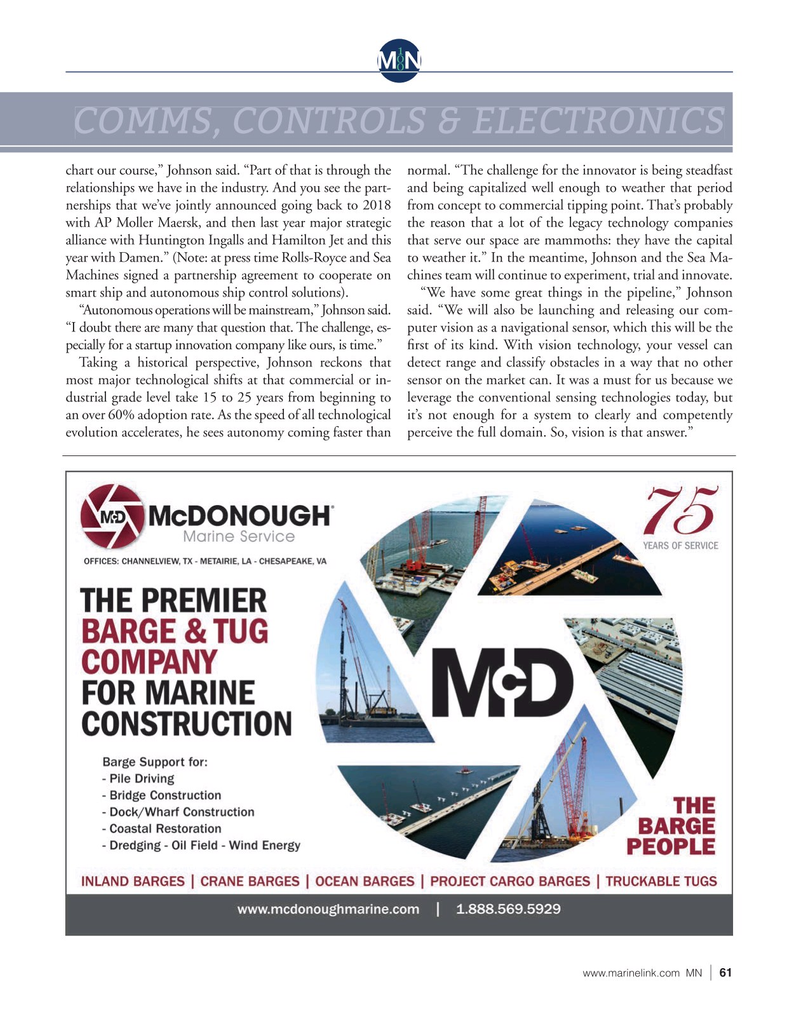 COMMS, CONTROLS & ELECTRONICS chart our course,” Johnson said. “Part of that is through the normal. “The challenge for the innovator is being steadfast relationships we have in the industry. And you see the part- and being capitalized well enough to weather that period nerships that we’ve jointly announced going back to 2018 from concept to commercial tipping point. That’s probably with AP Moller Maersk, and then last year major strategic the reason that a lot of the legacy technology companies alliance with Huntington Ingalls and Hamilton Jet and this that serve our space are mammoths: they have the capital year with Damen.” (Note: at press time Rolls-Royce and Sea to weather it.” In the meantime, Johnson and the Sea Ma-

Machines signed a partnership agreement to cooperate on chines team will continue to experiment, trial and innovate. smart ship and autonomous ship control solutions). “We have some great things in the pipeline,” Johnson “Autonomous operations will be mainstream,” Johnson said. said. “We will also be launching and releasing our com- “I doubt there are many that question that. The challenge, es- puter vision as a navigational sensor, which this will be the pecially for a startup innovation company like ours, is time.” ? rst of its kind. With vision technology, your vessel can

Taking a historical perspective, Johnson reckons that detect range and classify obstacles in a way that no other most major technological shifts at that commercial or in- sensor on the market can. It was a must for us because we dustrial grade level take 15 to 25 years from beginning to leverage the conventional sensing technologies today, but an over 60% adoption rate. As the speed of all technological it’s not enough for a system to clearly and competently evolution accelerates, he sees autonomy coming faster than perceive the full domain. So, vision is that answer.” www.marinelink.com MN 61|