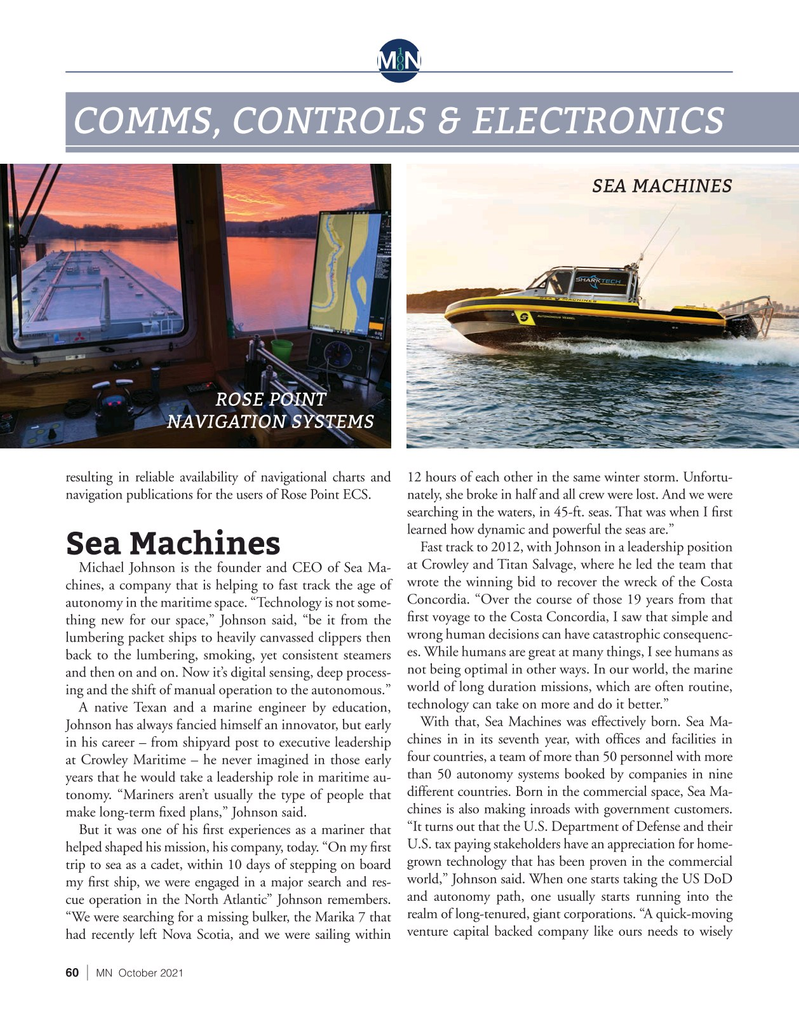 NAVIGATION SYSTEMS resulting in reliable availability of navigational charts and 12 hours of each other in the same winter storm. Unfortu- navigation publications for the users of Rose Point ECS. nately, she broke in half and all crew were lost. And we were searching in the waters, in 45-ft. seas. That was when I ? rst learned how dynamic and powerful the seas are.”

Fast track to 2012, with Johnson in a leadership position

Sea Machines at Crowley and Titan Salvage, where he led the team that

Michael Johnson is the founder and CEO of Sea Ma- chines, a company that is helping to fast track the age of wrote the winning bid to recover the wreck of the Costa

Concordia. “Over the course of those 19 years from that autonomy in the maritime space. “Technology is not some- thing new for our space,” Johnson said, “be it from the ? rst voyage to the Costa Concordia, I saw that simple and lumbering packet ships to heavily canvassed clippers then wrong human decisions can have catastrophic consequenc- back to the lumbering, smoking, yet consistent steamers es. While humans are great at many things, I see humans as not being optimal in other ways. In our world, the marine and then on and on. Now it’s digital sensing, deep process- world of long duration missions, which are often routine, ing and the shift of manual operation to the autonomous.”

A native Texan and a marine engineer by education, technology can take on more and do it better.”

With that, Sea Machines was effectively born. Sea Ma-

Johnson has always fancied himself an innovator, but early in his career – from shipyard post to executive leadership chines in in its seventh year, with of? ces and facilities in at Crowley Maritime – he never imagined in those early four countries, a team of more than 50 personnel with more than 50 autonomy systems booked by companies in nine years that he would take a leadership role in maritime au- tonomy. “Mariners aren’t usually the type of people that different countries. Born in the commercial space, Sea Ma- chines is also making inroads with government customers. make long-term ? xed plans,” Johnson said.

But it was one of his ? rst experiences as a mariner that “It turns out that the U.S. Department of Defense and their helped shaped his mission, his company, today. “On my ? rst U.S. tax paying stakeholders have an appreciation for home- trip to sea as a cadet, within 10 days of stepping on board grown technology that has been proven in the commercial world,” Johnson said. When one starts taking the US DoD my ? rst ship, we were engaged in a major search and res- cue operation in the North Atlantic” Johnson remembers. and autonomy path, one usually starts running into the “We were searching for a missing bulker, the Marika 7 that realm of long-tenured, giant corporations. “A quick-moving had recently left Nova Scotia, and we were sailing within venture capital backed company like ours needs to wisely 60 | MN October 2021