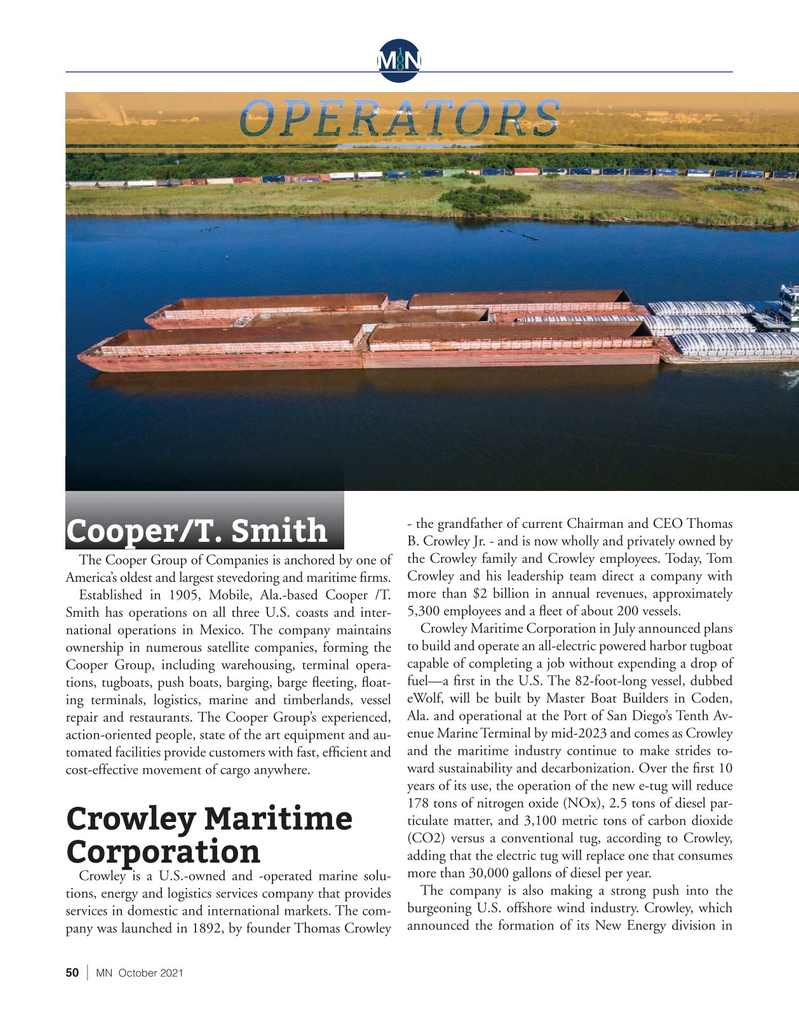 B. Crowley Jr. - and is now wholly and privately owned by

The Cooper Group of Companies is anchored by one of the Crowley family and Crowley employees. Today, Tom

Crowley and his leadership team direct a company with

Smith has operations on all three U.S. coasts and inter-

Crowley Maritime Corporation in July announced plans national operations in Mexico. The company maintains ownership in numerous satellite companies, forming the to build and operate an all-electric powered harbor tugboat capable of completing a job without expending a drop of

Cooper Group, including warehousing, terminal opera- fuel—a ? rst in the U.S. The 82-foot-long vessel, dubbed tions, tugboats, push boats, barging, barge ? eeting, ? oat- ing terminals, logistics, marine and timberlands, vessel eWolf, will be built by Master Boat Builders in Coden, repair and restaurants. The Cooper Group’s experienced, Ala. and operational at the Port of San Diego’s Tenth Av- enue Marine Terminal by mid-2023 and comes as Crowley action-oriented people, state of the art equipment and au- tomated facilities provide customers with fast, ef? cient and and the maritime industry continue to make strides to- ward sustainability and decarbonization. Over the ? rst 10 cost-effective movement of cargo anywhere.

years of its use, the operation of the new e-tug will reduce 178 tons of nitrogen oxide (NOx), 2.5 tons of diesel par- ticulate matter, and 3,100 metric tons of carbon dioxide

Crowley Maritime (CO2) versus a conventional tug, according to Crowley, adding that the electric tug will replace one that consumes

Corporation more than 30,000 gallons of diesel per year.

Crowley is a U.S.-owned and -operated marine solu-

The company is also making a strong push into the tions, energy and logistics services company that provides burgeoning U.S. offshore wind industry. Crowley, which services in domestic and international markets. The com- pany was launched in 1892, by founder Thomas Crowley announced the formation of its New Energy division in 50 | MN October 2021