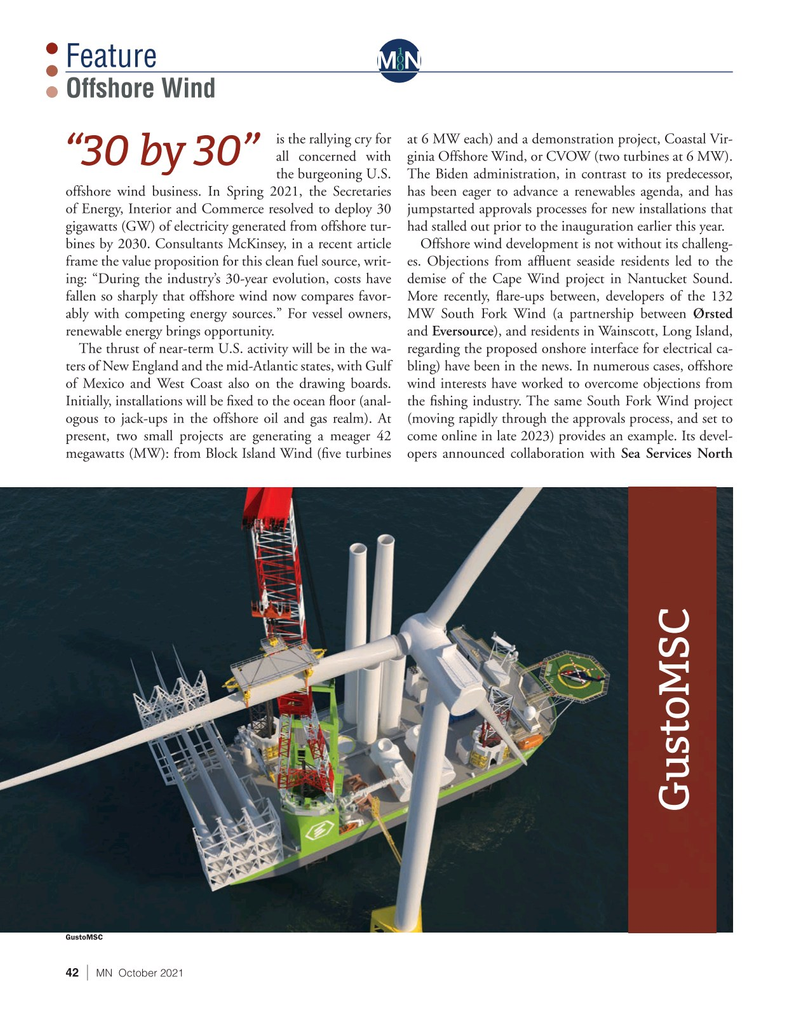 Offshore Wind is the rallying cry for at 6 MW each) and a demonstration project, Coastal Vir- all concerned with ginia Offshore Wind, or CVOW (two turbines at 6 MW). “30 by 30” the burgeoning U.S. The Biden administration, in contrast to its predecessor, offshore wind business. In Spring 2021, the Secretaries has been eager to advance a renewables agenda, and has of Energy, Interior and Commerce resolved to deploy 30 jumpstarted approvals processes for new installations that gigawatts (GW) of electricity generated from offshore tur- had stalled out prior to the inauguration earlier this year. bines by 2030. Consultants McKinsey, in a recent article Offshore wind development is not without its challeng- frame the value proposition for this clean fuel source, writ- es. Objections from af? uent seaside residents led to the ing: “During the industry’s 30-year evolution, costs have demise of the Cape Wind project in Nantucket Sound. fallen so sharply that offshore wind now compares favor- More recently, ? are-ups between, developers of the 132 ably with competing energy sources.” For vessel owners, MW South Fork Wind (a partnership between Ørsted renewable energy brings opportunity. and Eversource), and residents in Wainscott, Long Island,

The thrust of near-term U.S. activity will be in the wa- regarding the proposed onshore interface for electrical ca- ters of New England and the mid-Atlantic states, with Gulf bling) have been in the news. In numerous cases, offshore of Mexico and West Coast also on the drawing boards. wind interests have worked to overcome objections from