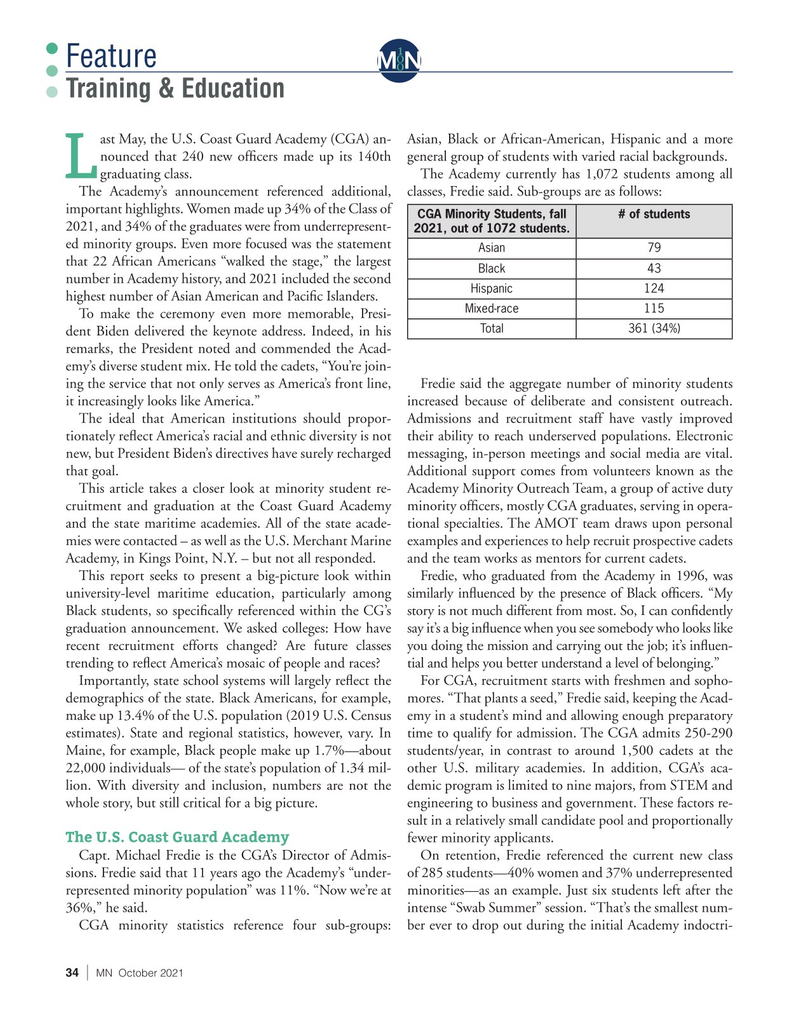 Training & Education ast May, the U.S. Coast Guard Academy (CGA) an- Asian, Black or African-American, Hispanic and a more nounced that 240 new of? cers made up its 140th general group of students with varied racial backgrounds.

L graduating class. The Academy currently has 1,072 students among all

The Academy’s announcement referenced additional, classes, Fredie said. Sub-groups are as follows: important highlights. Women made up 34% of the Class of

ed minority groups. Even more focused was the statement

Asian 79 that 22 African Americans “walked the stage,” the largest

Black 43 number in Academy history, and 2021 included the second

To make the ceremony even more memorable, Presi-

Total 361 (34%) dent Biden delivered the keynote address. Indeed, in his remarks, the President noted and commended the Acad- emy’s diverse student mix. He told the cadets, “You’re join- ing the service that not only serves as America’s front line, Fredie said the aggregate number of minority students it increasingly looks like America.” increased because of deliberate and consistent outreach.

The ideal that American institutions should propor- Admissions and recruitment staff have vastly improved tionately re? ect America’s racial and ethnic diversity is not their ability to reach underserved populations. Electronic new, but President Biden’s directives have surely recharged messaging, in-person meetings and social media are vital. that goal. Additional support comes from volunteers known as the

This article takes a closer look at minority student re- Academy Minority Outreach Team, a group of active duty cruitment and graduation at the Coast Guard Academy minority of? cers, mostly CGA graduates, serving in opera- and the state maritime academies. All of the state acade- tional specialties. The AMOT team draws upon personal mies were contacted – as well as the U.S. Merchant Marine examples and experiences to help recruit prospective cadets

Academy, in Kings Point, N.Y. – but not all responded. and the team works as mentors for current cadets.

This report seeks to present a big-picture look within Fredie, who graduated from the Academy in 1996, was university-level maritime education, particularly among similarly in? uenced by the presence of Black of? cers. “My

Black students, so speci? cally referenced within the CG’s story is not much different from most. So, I can con? dently graduation announcement. We asked colleges: How have say it’s a big in? uence when you see somebody who looks like recent recruitment efforts changed? Are future classes you doing the mission and carrying out the job; it’s in? uen- trending to re? ect America’s mosaic of people and races? tial and helps you better understand a level of belonging.”

Importantly, state school systems will largely re? ect the For CGA, recruitment starts with freshmen and sopho- demographics of the state. Black Americans, for example, mores. “That plants a seed,” Fredie said, keeping the Acad- make up 13.4% of the U.S. population (2019 U.S. Census emy in a student’s mind and allowing enough preparatory estimates). State and regional statistics, however, vary. In time to qualify for admission. The CGA admits 250-290

Maine, for example, Black people make up 1.7%—about students/year, in contrast to around 1,500 cadets at the 22,000 individuals— of the state’s population of 1.34 mil- other U.S. military academies. In addition, CGA’s aca- lion. With diversity and inclusion, numbers are not the demic program is limited to nine majors, from STEM and whole story, but still critical for a big picture. engineering to business and government. These factors re- sult in a relatively small candidate pool and proportionally

Capt. Michael Fredie is the CGA’s Director of Admis- On retention, Fredie referenced the current new class sions. Fredie said that 11 years ago the Academy’s “under- of 285 students—40% women and 37% underrepresented represented minority population” was 11%. “Now we’re at minorities—as an example. Just six students left after the 36%,” he said. intense “Swab Summer” session. “That’s the smallest num-