Choosing the year’s ‘top stories’ is always a difficult task. Many compelling story threads played out, each dramatically impacting the North American waterfront, and in particular, the workboat sector – each in their own unique way.

The Infrastructure Battle Continues
The EXECUTIVE SUMMARY H.R. 2396, the “Full Utilization of the Harbor Maintenance Trust Fund Act”, will ensure that the Harbor Maintenance Trust Fund is used for its intended purpose – maintaining Federally-authorized harbors. The legislation would allow the U.S. Army Corps of Engineers (Corps) to dredge all Federal harbors to their constructed widths and depths. Unfortunately, Washington continues in chaos with another continuing resolution on the budget; the next one expires on December 20th. Conventional wisdom says that until the impeachment inquiry is completed, there will be no resolution of budget issues. Separately, the needs of the many, often relatively small, ports and terminals on the inland waterways continue to be overlooked. Presently there are only limited funding opportunities that make inland ports and infrastructure eligible for funding at all, and only a small amount of the programs typically fund port-type projects. Efforts are being made to address this imbalance.

Subchapter M: One Year In
As the new Subchapter M towboat rule rolled out, it didn’t take long to discover that the regulation wasn’t perfect. In a nutshell, the U.S. Coast Guard does not have the manpower to add more than 5,000 vessels to its workload. The COI application process has been anything but smooth, and in many areas, fraught with delays. The Towing Safety Advisory Council (TSAC) – a committee that provides for the Federal government to seek the advice of citizens on a range of issues affecting its policies and programs – was set to take up a review, but the September meeting was cancelled, and reportedly, TSAC’s charter wasn’t renewed. Industry needs TSAC back. Ultimately, this helps everyone to figure out this new law. It took the Coast Guard four years after the NPRM came out to publish the final rule and it still isn’t right. All that said; it is fair to ask, especially in the absence of TSAC, what happens now?

U.S. Coast Guard’s Drug Testing Program
This year, the domestic waterfront got some less-than-happy news when the U.S. Coast Guard announced that the calendar year 2019 minimum random drug testing rate had been set at 50 percent of covered crewmembers. Nobody is happy about it, but in truth, the Coast Guard had little to say about the matter. 46 CFR part 16.230(f)(2) requires the Commandant to set the minimum random drug testing rate at 50 percent when the positivity rate for drug use is greater than one percent. And, it is. Separately, it’s been a few years since U.S. Coast Guard Chief Administrative Law Judge Walt Brudzinski penned an exhaustive study on the implications of drug and alcohol testing on board domestic passenger vessels and fishing vessels. That study sought to determine if random drug testing had any impact of post-accident ‘positive’ tests. It turns out that it does. That much was easy to see since one group of mariners (passenger vessels) participates in random testing programs and the other (fishing) does not. The Coast Guard is looking hard at changing that. But, only Congress can make that happen.

Electric / Hybrid propulsion for Workboats
Hybrid and EV propulsion will soon dominate transportation both ashore and at sea. Late last year, major engine manufacturers, shipbuilders, marine engineers and naval architects tilted their heads when the Enhydra, a 600 person Red & White fleet Hybrid tour boat and latest development of BAE HybriGen won industry accolades. This was developed by Tecknicraft Design with a BAE/Corvus/Cummins 160 kWh generator, control system and AC traction motor drive system. Separately, the nascent firm Harbor Harvest is already delivering local New England family farm products across Long Island Sound by refrigerated Hybrid Catamarans without emissions. Still another project, ABB’s Maid of the Mist is truly revolutionary because the vessel will not be fitted with ANY engines – it is truly all electric and the fact the electricity comes from the local hydro dam means a true zero emission vessel. In addition to integrating the ship-to-shore battery charging connection, ABB will supply the Maid of the Mist newbuilding project with switchboards, drives, batteries, propulsion motors for both sets of stern and bow thrusters, and the integrated control system. On the inland side of the equation, ABB expects to see electric towboats (ETB) sailing in 2020.

The Diesel Outboard Arrives
The diesel outboard is here, and it is making waves. For example, The OXE was recently approved by the U.S. Environmental Protection Agency as the first Tier 3 diesel outboard for commercial use. The OXE and its EPA Tier 3 emissions compliance will exceed all the criteria when applying for outboard grants. Separately, Cox Powertrain last year revealed the final concept of its diesel outboard engine, the CXO300. Cox originally developed the engine to allow Navies to comply with the NATO single fuel policy, however the firm has since shifted away from developing a purely military engine to an off the shelf commercial engine that met military requirements. Cox emphasizes durability, fuel performance and ease of service to appeal to the commercial applications. For military operations, of course, the appeal of diesel in terms of safety alone is a big step forward. Without a doubt, the diesel outboard is here to stay and there are many compelling reasons for commercial and military operators alike to consider this option.

Autonomy in High Gear
As the pace of change quickens, autonomous vessels are already providing service and value on the water. The leap in productivity, performance, and safety offered by these systems, moving marine operations up the ladder of modernity to reduce annual accident rates, both in commercial and recreational, improve on-time performance, and reduce operational expenses are all significant beneficiaries of this new trend. The single largest impediment is finding progressive operators that are willing to try new technology in an attempt to prove the value in their operations. Close behind is the fierce resistance being put up by maritime and longshore labor. But, autonomy and robotics arguably don’t eliminate jobs; they act as a force multiplier while often increasing headcount. The nation has been investing in automation for about 75 years, yet today we have an unemployment rate of 3.7%. Marine automation isn’t going to change that.

Offshore Wind: a Freshening Breeze?
Finally, starting with Dominion Energy’s Coastal Virginia Offshore Wind Project, a joint venture with Danish wind developer Orsted is underway. Indeed, there is a lot of offshore wind energy in the developmental pipeline. It is also true that except for Block Island in Rhode Island, all the work on US offshore wind is still preliminary. That’s not to say it isn’t happening. Icebreaker Wind is a six turbine, 20.7-megawatt offshore demonstration project in Lake Erie. Once approved, it will be the first freshwater project in North America. Construction is slated for 2022. The promise of offshore wind is still a work in progress. A big part of the domestic offshore wind discussion involves the Jones Act. U.S. offshore operators want to be a part of the promised coming boom and for U.S. boat builders, the coming boom can’t come a minute too soon. But, when it comes to domestic offshore wind, getting these renewable energy projects done is often more difficult than getting permission to build a refinery. Opposition comes from many – sometimes surprising – quarters. Nevertheless, wind is coming. The only question is: when?

The Advent of VIDA
US ballast water regulations made a sharp turn last December. That’s when President Trump signed the Frank LoBiondo Coast Guard Authorization Act of 2018. That legislation contained Title IX – the “Vessel Incidental Discharge Act (VIDA),” a welcome legislative goal among many maritime business trade groups who had long complained that US ballast water regs were such a confusing mix of directions and requirements that compliance was almost impossible. Until now, ballast water has been controlled on numerous regulatory fronts: through EPA’s vessel general permits (VGP) and the Nonindigenous Aquatic Nuisance Prevention and Control Act and the National Invasive Species Act as well as other U.S. Coast Guard and clean water legislation provisions. Beyond this, almost twenty states further ‘Balkanized’ the critical issue by forming individual, sometimes obscure local statutes. Congress, with VIDA, ripped out this regulatory tangle. By 2022, at the latest, the VGP will be gone, as will aquatic nuisance and invasive species legislation. Instead of a permit, discharges will be controlled via regulations. VIDA allows states to participate in standards development, but keeps final decisions within EPA and the Coast Guard.

CBP’s Proposed Rulings: Jones Act Implications
In late October, the U.S.-based Offshore Marine Services Association (OMSA), the mouthpiece of the domestic offshore marine transportation service industry, responded to proposed CBP Modifications to Jones Act rulings. This 10-year in the making process certainly is complicated – perhaps intentionally. And, as a result, as the New Year edges ever closer, OMSA is closely monitoring developments there. According to OMSA, CBP “unconventional process” would negatively impact full enforcement of the Jones Act. In a nutshell, the US Customs and Border Protection (CBP) proposes to modify and revoke various prior ruling letters relating to CBP’s application of the Jones Act to the transportation of certain merchandise and equipment between coastwise points. OMSA President Aaron Smith insists, “We appreciate CBP has again confirmed that a number of previously issued letter rulings are not consistent with the Jones Act and must be revoked or modified. If CBP and DHS enforce the letter and spirit of this proposal, it will benefit U.S. mariners and the workers in U.S. shipyards. The Jones Act does not allow for the lateral movement of merchandise by foreign flagged ships and no amount of interpretive guidance changes that.” Stay tuned: this one is far from over.

The Tragic Conception Fire & Sinking
On the morning of September 2, 2019, the 75-foot commercial diving vessel Conception, with 39 persons on board, caught fire while anchored in Platts Harbor, off Santa Cruz Island in California. The vessel burned to the waterline by morning and subsequently sank in about 60 feet of water. Thirty-three passengers and one crewmember died, making this the largest loss of life in a US marine casualty in decades. The tragic event reminds us that while most of the attention to passenger vessel safety is focused on the chronic failures that regularly occur in developing countries, these casualties can and do happen here, as well. The NTSB is the lead federal agency for this investigation. Investigators are scrutinizing the wreckage, as well as reviewing current regulations regarding vessels of this type, year of build, and operation; early warning and fire detection alarm systems; evacuation routes; training; and current company policies and procedures. Those investigations were still ongoing as this edition went to press. 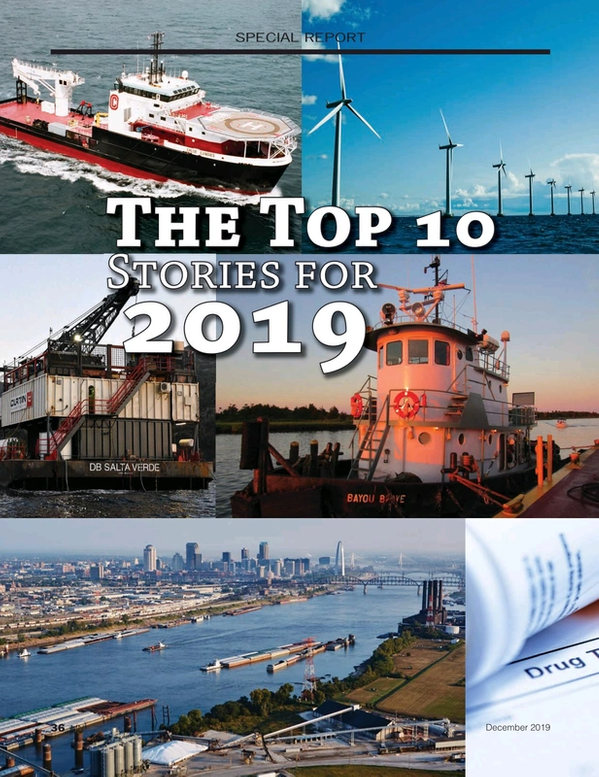 Read The Top 10 Workboat Stories for 2019 in Pdf, Flash or Html5 edition of December 2019 Marine News