Read this page in Pdf, Flash or Html5 edition of May 2019 Marine News Magazine 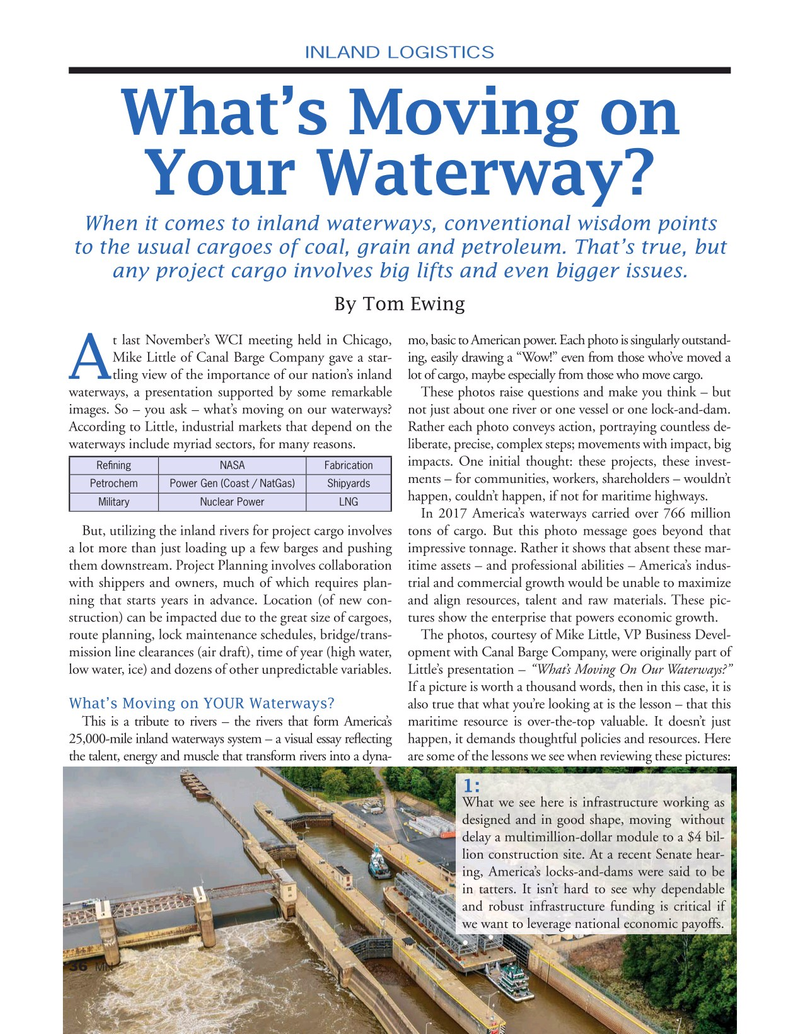 When it comes to inland waterways, conventional wisdom points to the usual cargoes of coal, grain and petroleum. That’s true, but any project cargo involves big lifts and even bigger issues.

Mike Little of Canal Barge Company gave a star- ing, easily drawing a “Wow!” even from those who’ve moved a tling view of the importance of our nation’s inland lot of cargo, maybe especially from those who move cargo.

A waterways, a presentation supported by some remarkable These photos raise questions and make you think – but images. So – you ask – what’s moving on our waterways? not just about one river or one vessel or one lock-and-dam.

According to Little, industrial markets that depend on the Rather each photo conveys action, portraying countless de- waterways include myriad sectors, for many reasons. liberate, precise, complex steps; movements with impact, big impacts. One initial thought: these projects, these invest-

In 2017 America’s waterways carried over 766 million

But, utilizing the inland rivers for project cargo involves tons of cargo. But this photo message goes beyond that a lot more than just loading up a few barges and pushing impressive tonnage. Rather it shows that absent these mar- them downstream. Project Planning involves collaboration itime assets – and professional abilities – America’s indus- with shippers and owners, much of which requires plan- trial and commercial growth would be unable to maximize ning that starts years in advance. Location (of new con- and align resources, talent and raw materials. These pic- struction) can be impacted due to the great size of cargoes, tures show the enterprise that powers economic growth.

If a picture is worth a thousand words, then in this case, it is

What’s Moving on YOUR Waterways? also true that what you’re looking at is the lesson – that this

This is a tribute to rivers – the rivers that form America’s maritime resource is over-the-top valuable. It doesn’t just 25,000-mile inland waterways system – a visual essay re? ecting happen, it demands thoughtful policies and resources. Here the talent, energy and muscle that transform rivers into a dyna- are some of the lessons we see when reviewing these pictures: 1:

What we see here is infrastructure working as designed and in good shape, moving without delay a multimillion-dollar module to a $4 bil- lion construction site. At a recent Senate hear- ing, America’s locks-and-dams were said to be in tatters. It isn’t hard to see why dependable and robust infrastructure funding is critical if we want to leverage national economic payoffs.