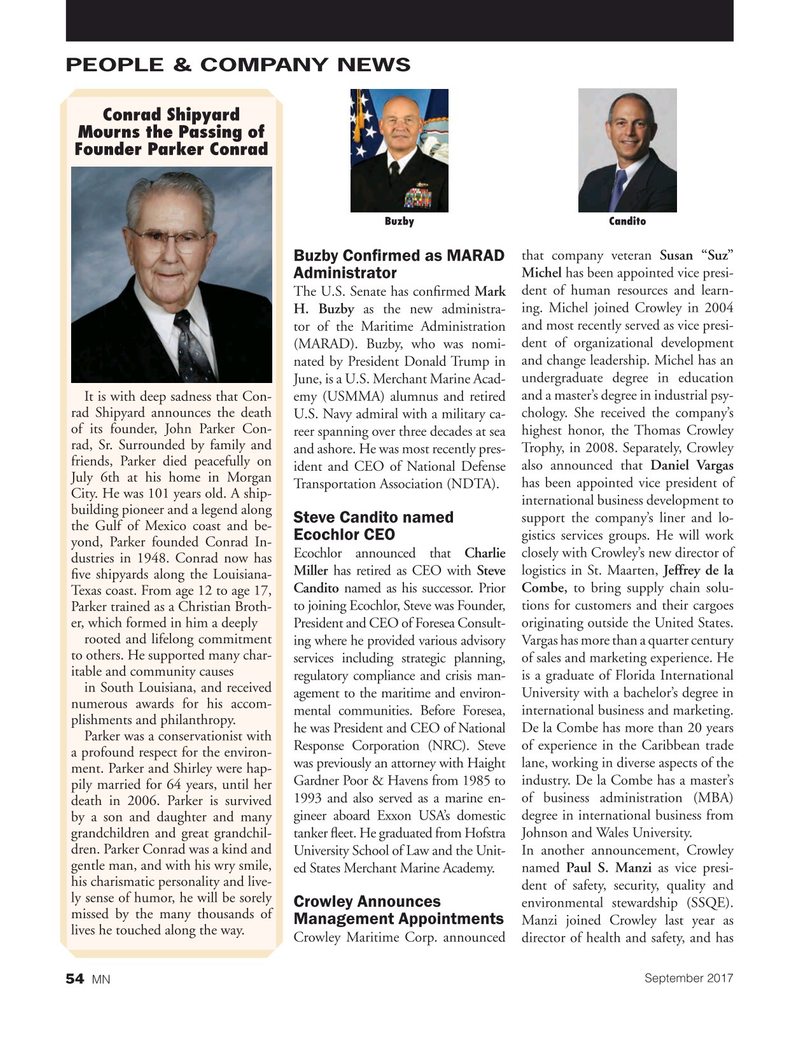 Mourns the Passing of

Michel has been appointed vice presi-

The U.S. Senate has con? rmed Mark dent of human resources and learn-

H. Buzby as the new administra- ing. Michel joined Crowley in 2004 tor of the Maritime Administration and most recently served as vice presi- (MARAD). Buzby, who was nomi- dent of organizational development nated by President Donald Trump in and change leadership. Michel has an

It is with deep sadness that Con- emy (USMMA) alumnus and retired and a master’s degree in industrial psy- rad Shipyard announces the death U.S. Navy admiral with a military ca- chology. She received the company’s of its founder, John Parker Con- reer spanning over three decades at sea highest honor, the Thomas Crowley rad, Sr. Surrounded by family and and ashore. He was most recently pres- Trophy, in 2008. Separately, Crowley friends, Parker died peacefully on ident and CEO of National Defense also announced that Daniel Vargas

July 6th at his home in Morgan

Transportation Association (NDTA). has been appointed vice president of

City. He was 101 years old. A ship- international business development to building pioneer and a legend along support the company’s liner and lo-

Steve Candito named the Gulf of Mexico coast and be- gistics services groups. He will work

Ecochlor announced that Charlie closely with Crowley’s new director of dustries in 1948. Conrad now has

Miller has retired as CEO with Steve logistics in St. Maarten, Jeffrey de la ? ve shipyards along the Louisiana-

Candito named as his successor. Prior Combe, to bring supply chain solu-

Parker trained as a Christian Broth- to joining Ecochlor, Steve was Founder, tions for customers and their cargoes er, which formed in him a deeply President and CEO of Foresea Consult- originating outside the United States. rooted and lifelong commitment ing where he provided various advisory Vargas has more than a quarter century to others. He supported many char- services including strategic planning, of sales and marketing experience. He itable and community causes regulatory compliance and crisis man- is a graduate of Florida International in South Louisiana, and received agement to the maritime and environ- University with a bachelor’s degree in numerous awards for his accom- mental communities. Before Foresea, international business and marketing. plishments and philanthropy.

Parker was a conservationist with

Response Corporation (NRC). Steve of experience in the Caribbean trade a profound respect for the environ- was previously an attorney with Haight lane, working in diverse aspects of the ment. Parker and Shirley were hap-

Gardner Poor & Havens from 1985 to industry. De la Combe has a master’s pily married for 64 years, until her 1993 and also served as a marine en- of business administration (MBA) death in 2006. Parker is survived gineer aboard Exxon USA’s domestic degree in international business from by a son and daughter and many grandchildren and great grandchil- tanker ? eet. He graduated from Hofstra Johnson and Wales University.

dren. Parker Conrad was a kind and University School of Law and the Unit- In another announcement, Crowley gentle man, and with his wry smile, ed States Merchant Marine Academy. named Paul S. Manzi as vice presi- his charismatic personality and live- dent of safety, security, quality and ly sense of humor, he will be sorely

Crowley Announces environmental stewardship (SSQE). missed by the many thousands of

Manzi joined Crowley last year as lives he touched along the way.

Crowley Maritime Corp. announced director of health and safety, and has