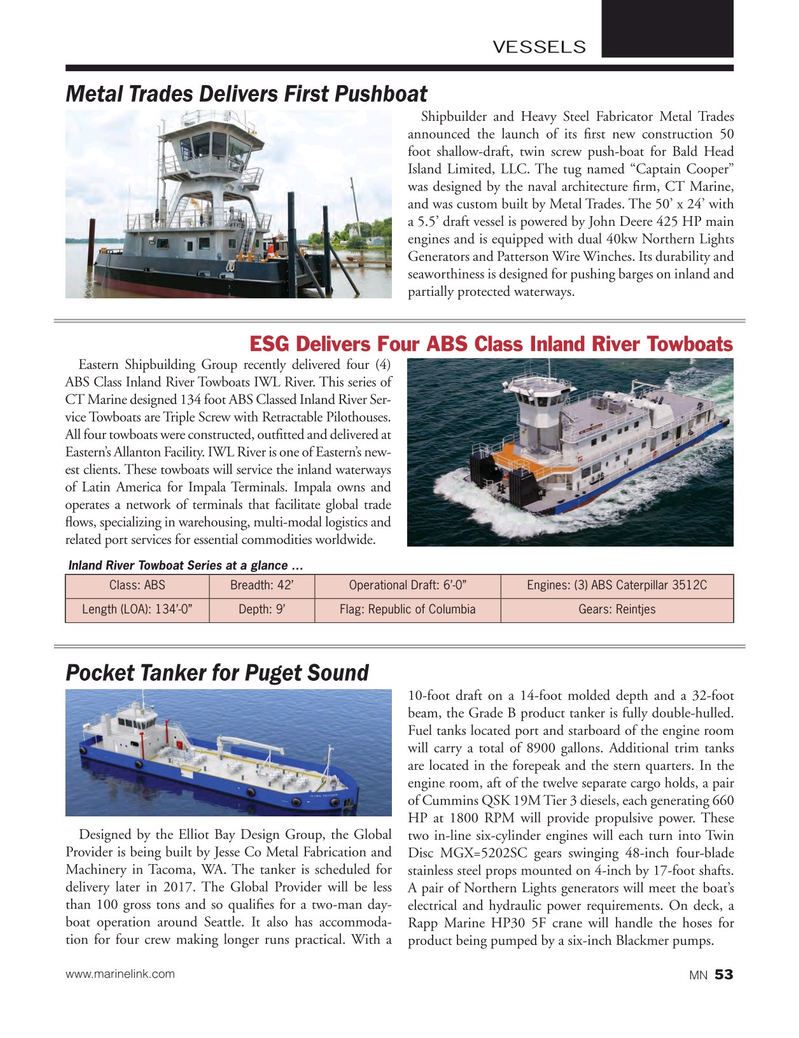 Island Limited, LLC. The tug named “Captain Cooper” was designed by the naval architecture ? rm, CT Marine, and was custom built by Metal Trades. The 50’ x 24’ with a 5.5’ draft vessel is powered by John Deere 425 HP main engines and is equipped with dual 40kw Northern Lights

Generators and Patterson Wire Winches. Its durability and seaworthiness is designed for pushing barges on inland and partially protected waterways.

All four towboats were constructed, out? tted and delivered at

Pocket Tanker for Puget Sound 10-foot draft on a 14-foot molded depth and a 32-foot beam, the Grade B product tanker is fully double-hulled.

Fuel tanks located port and starboard of the engine room will carry a total of 8900 gallons. Additional trim tanks are located in the forepeak and the stern quarters. In the engine room, aft of the twelve separate cargo holds, a pair of Cummins QSK 19M Tier 3 diesels, each generating 660

HP at 1800 RPM will provide propulsive power. These

Designed by the Elliot Bay Design Group, the Global two in-line six-cylinder engines will each turn into Twin

Machinery in Tacoma, WA. The tanker is scheduled for stainless steel props mounted on 4-inch by 17-foot shafts. delivery later in 2017. The Global Provider will be less A pair of Northern Lights generators will meet the boat’s than 100 gross tons and so quali? es for a two-man day- electrical and hydraulic power requirements. On deck, a boat operation around Seattle. It also has accommoda- Rapp Marine HP30 5F crane will handle the hoses for tion for four crew making longer runs practical. With a product being pumped by a six-inch Blackmer pumps.