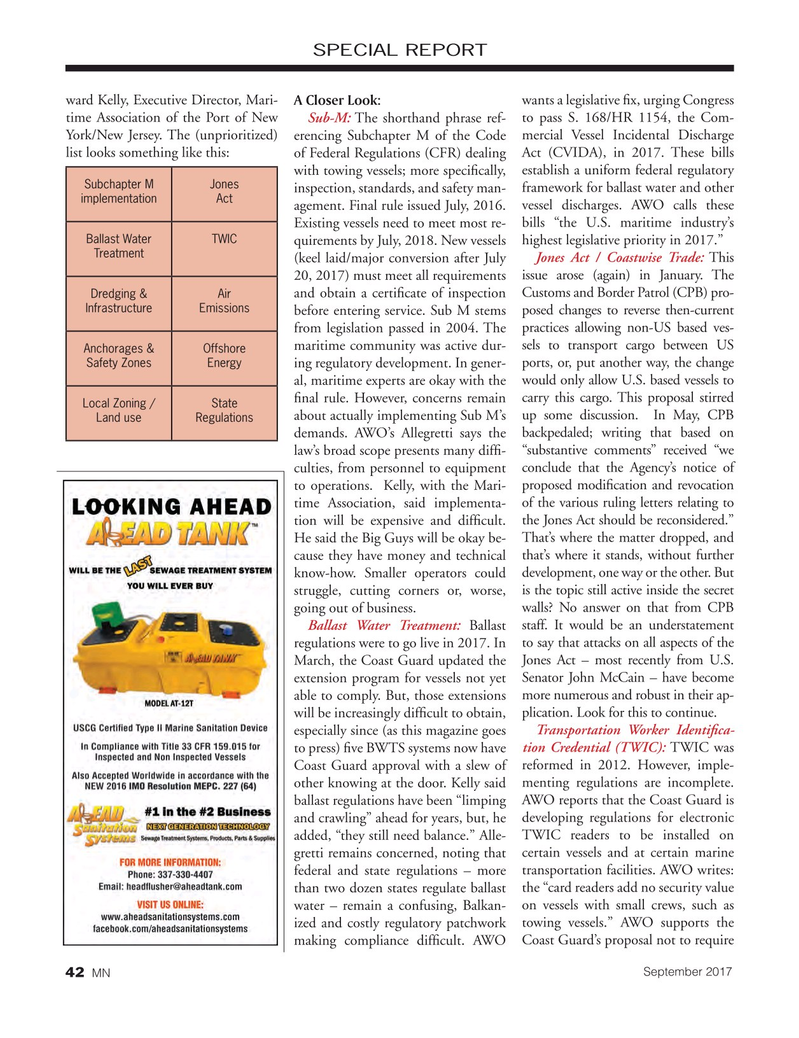 Existing vessels need to meet most re- bills “the U.S. maritime industry’s

Safety Zones Energy ing regulatory development. In gener- ports, or, put another way, the change al, maritime experts are okay with the would only allow U.S. based vessels to ? nal rule. However, concerns remain carry this cargo. This proposal stirred

Local Zoning / State about actually implementing Sub M’s up some discussion. In May, CPB

Land use Regulations demands. AWO’s Allegretti says the backpedaled; writing that based on law’s broad scope presents many dif? - “substantive comments” received “we culties, from personnel to equipment conclude that the Agency’s notice of to operations. Kelly, with the Mari- proposed modi? cation and revocation time Association, said implementa- of the various ruling letters relating to tion will be expensive and dif? cult. the Jones Act should be reconsidered.”

He said the Big Guys will be okay be- That’s where the matter dropped, and cause they have money and technical that’s where it stands, without further know-how. Smaller operators could development, one way or the other. But struggle, cutting corners or, worse, is the topic still active inside the secret going out of business. walls? No answer on that from CPB

Ballast Water Treatment: Ballast staff. It would be an understatement regulations were to go live in 2017. In to say that attacks on all aspects of the

March, the Coast Guard updated the Jones Act – most recently from U.S. extension program for vessels not yet Senator John McCain – have become able to comply. But, those extensions more numerous and robust in their ap- will be increasingly dif? cult to obtain, plication. Look for this to continue.

Coast Guard approval with a slew of reformed in 2012. However, imple- other knowing at the door. Kelly said menting regulations are incomplete. ballast regulations have been “limping AWO reports that the Coast Guard is and crawling” ahead for years, but, he developing regulations for electronic added, “they still need balance.” Alle- TWIC readers to be installed on gretti remains concerned, noting that certain vessels and at certain marine federal and state regulations – more transportation facilities. AWO writes: than two dozen states regulate ballast the “card readers add no security value water – remain a confusing, Balkan- on vessels with small crews, such as ized and costly regulatory patchwork towing vessels.” AWO supports the making compliance dif? cult. AWO Coast Guard’s proposal not to require