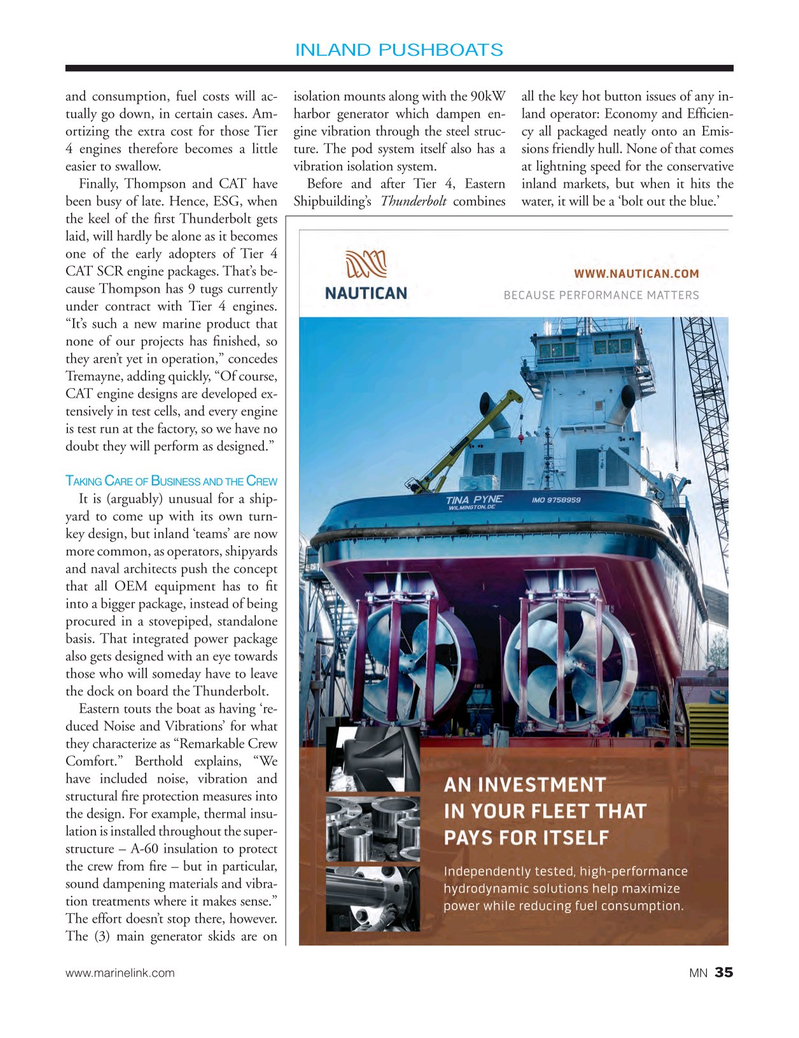 INLAND PUSHBOATS and consumption, fuel costs will ac- isolation mounts along with the 90kW all the key hot button issues of any in- tually go down, in certain cases. Am- harbor generator which dampen en- land operator: Economy and Ef? cien- ortizing the extra cost for those Tier gine vibration through the steel struc- cy all packaged neatly onto an Emis- 4 engines therefore becomes a little ture. The pod system itself also has a sions friendly hull. None of that comes easier to swallow. vibration isolation system. at lightning speed for the conservative

Finally, Thompson and CAT have Before and after Tier 4, Eastern inland markets, but when it hits the been busy of late. Hence, ESG, when Shipbuilding’s Thunderbolt combines water, it will be a ‘bolt out the blue.’ the keel of the ? rst Thunderbolt gets laid, will hardly be alone as it becomes one of the early adopters of Tier 4

CAT SCR engine packages. That’s be- cause Thompson has 9 tugs currently under contract with Tier 4 engines. “It’s such a new marine product that none of our projects has ? nished, so they aren’t yet in operation,” concedes

CAT engine designs are developed ex- tensively in test cells, and every engine is test run at the factory, so we have no doubt they will perform as designed.”

T C B CAKING ARE OF USINESS AND THE REW

It is (arguably) unusual for a ship- yard to come up with its own turn- key design, but inland ‘teams’ are now more common, as operators, shipyards and naval architects push the concept that all OEM equipment has to ? t into a bigger package, instead of being procured in a stovepiped, standalone basis. That integrated power package also gets designed with an eye towards those who will someday have to leave the dock on board the Thunderbolt.

Comfort.” Berthold explains, “We have included noise, vibration and structural ? re protection measures into the design. For example, thermal insu- lation is installed throughout the super- structure – A-60 insulation to protect the crew from ? re – but in particular, sound dampening materials and vibra- tion treatments where it makes sense.”

The effort doesn’t stop there, however.

The (3) main generator skids are on www.marinelink.com MN 35