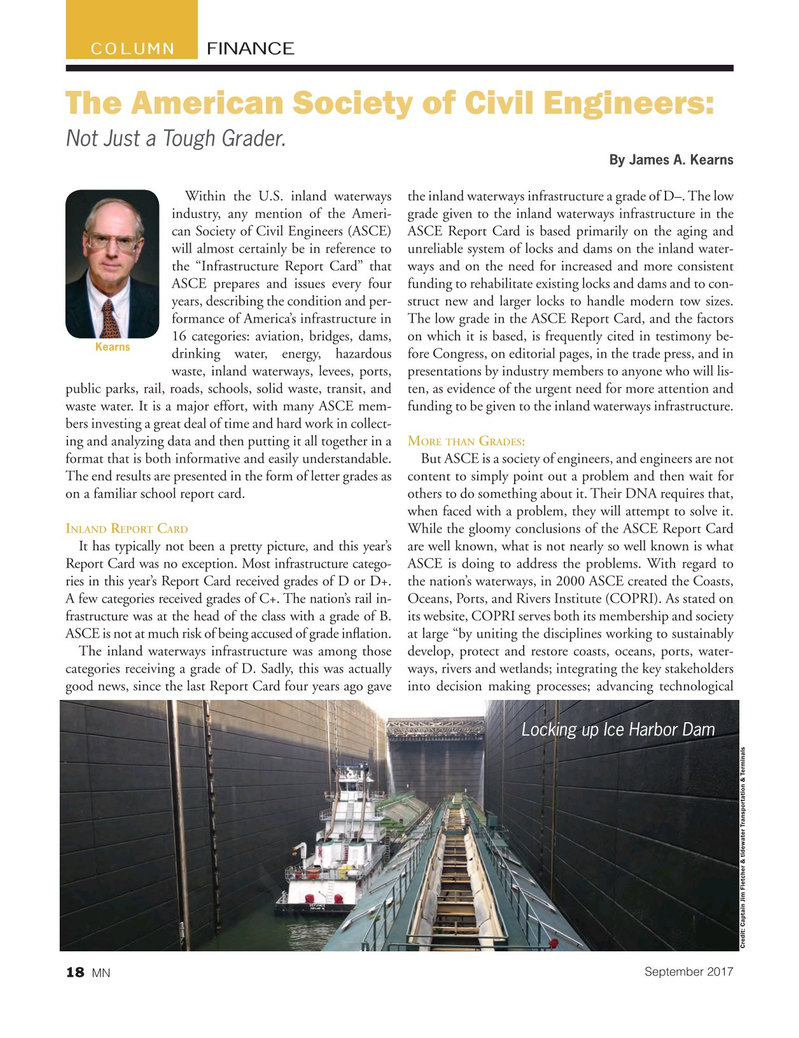 The American Society of Civil Engineers:

Not Just a Tough Grader.

By James A. Kearns

ASCE prepares and issues every four funding to rehabilitate existing locks and dams and to con- years, describing the condition and per- struct new and larger locks to handle modern tow sizes. formance of America’s infrastructure in The low grade in the ASCE Report Card, and the factors 16 categories: aviation, bridges, dams, on which it is based, is frequently cited in testimony be-

Kearns drinking water, energy, hazardous fore Congress, on editorial pages, in the trade press, and in waste, inland waterways, levees, ports, presentations by industry members to anyone who will lis- public parks, rail, roads, schools, solid waste, transit, and ten, as evidence of the urgent need for more attention and waste water. It is a major effort, with many ASCE mem- funding to be given to the inland waterways infrastructure.

ORE THAN RADES ing and analyzing data and then putting it all together in a M G : format that is both informative and easily understandable. But ASCE is a society of engineers, and engineers are not

The end results are presented in the form of letter grades as content to simply point out a problem and then wait for on a familiar school report card. others to do something about it. Their DNA requires that, when faced with a problem, they will attempt to solve it.

It has typically not been a pretty picture, and this year’s are well known, what is not nearly so well known is what

Report Card was no exception. Most infrastructure catego- ASCE is doing to address the problems. With regard to ries in this year’s Report Card received grades of D or D+. the nation’s waterways, in 2000 ASCE created the Coasts,

A few categories received grades of C+. The nation’s rail in- Oceans, Ports, and Rivers Institute (COPRI). As stated on frastructure was at the head of the class with a grade of B. its website, COPRI serves both its membership and society